This perspective view generated from digital topography provides an overview of the Mars terrain covered in the first color image of Mars from the High Resolution Imaging Science Experiment (HiRISE) camera on NASA’s Mars Reconnaissance Orbiter. It has a field of view 55 degrees wide, and no vertical exaggeration. The overview illustrates how the ridge has deformed several valleys and impact craters. 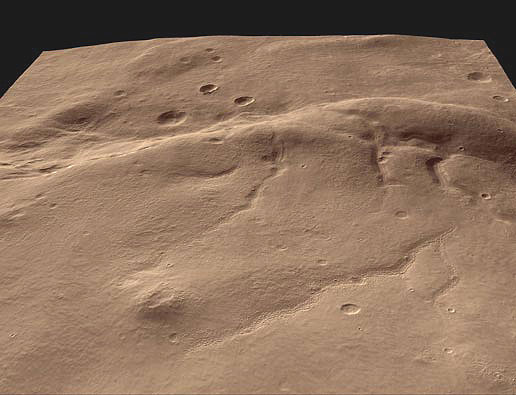 The image is a subset of the first HiRISE image from Mars, ( http://www.nasa.gov/mission_pages/MRO/multimedia/pia08014.html ) which was taken on March 24, 2006. The image was taken at a local Mars time of 07:33 and the scene is illuminated from the upper right with a solar incidence angle of 78.1 degrees, thus the sun was about 11.9 degrees above the horizon. At an Ls of 29 degrees (with Ls an indicator of Mars’ position in its orbit around the sun), the season on Mars is southern autumn.

NASA’s Jet Propulsion Laboratory, a division of the California Institute of Technology in Pasadena, manages the Mars Reconnaissance Orbiter for NASA’s Science Mission Directorate, Washington. Lockheed Martin Space Systems is the prime contractor for the project and built the spacecraft. The HiRISE camera was built by Ball Aerospace and Technology Corporation and is operated by the University of Arizona.