Opportunity has finished science observations at the “Payson” outcrop. Since the rover was operating in restricted mode, the team could plan a drive only every other day. Even so, Opportunity started the journey away from the rim of “Erebus.” Back on the regular schedule, the team next plans to drive the rover farther south.

Sol 757 (March 11, 2006): At the start of the sol, Opportunity was perched at an entrance to a second “half-pipe,” the team’s term for shallow troughs near the Payson outcrop in Erebus crater. There was more rubble and less nicely layered outcrop than at the previous half-pipe, and a dune blocked the exit to the south. The team decided to drive part-way in for outcrop imaging. Before the drive, Opportunity’s panoramic camera acquired images of a target called “Yuman.” The rover drove roughly 20 meters (66 feet) and then acquired standard post-drive imaging plus a panoramic camera mosaic of target “Hokan,” and a miniature thermal emission spectrometer scan of the same target. The next morning the rover collected part two of the Hokan panorama.

Sol 758: Opportunity drove about 17 meters (about 56 feet) back out of the half-pipe, with a quick stop mid-way to collect a small panoramic camera mosaic of target “Yavapai.” At the end of this sol, Opportunity had completed all planned science at Erebus and was ready to start driving south.

Sol 759: This sol was a recharge day, with a few atmospheric and cloud observations.

Sol 760: On the road again! This sol, Opportunity completed a 33.5-meter (110-foot) drive south over a patch of outcrop, then down the trough of two dunes.

Sol 761: The rover conducted observations of the atmosphere and the ground with the panoramic camera and the miniature thermal emission spectrometer.

Sol 762: Opportunity started the sol in front of a long, flat trough. The team planned a drive of approximately 50 meters (164 feet) south along this path. 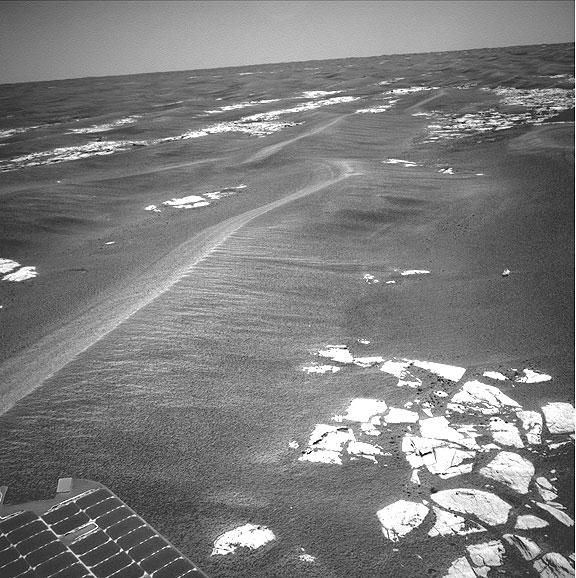