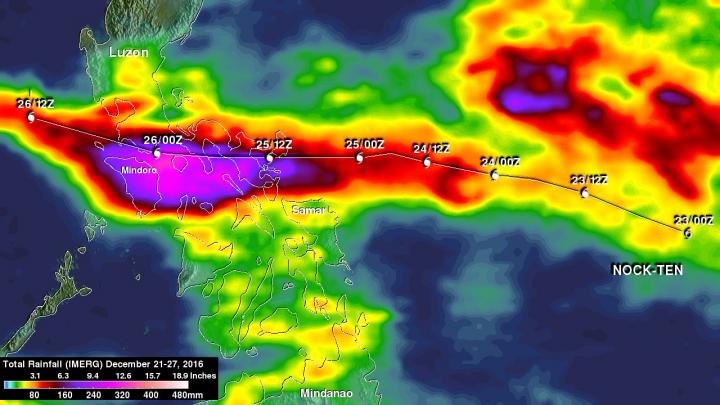 NASA has added up the large amounts of rainfall generated throughout the life of the once Super-typhoon Nock-ten from its birth to its entrance into the South China Sea on Dec. 27.

The Global Precipitation Measurement mission or GPM core satellite and other satellites gathered rainfall data on Nock-ten over its lifetime. That data was compiled and analyzed by IMERG at NASA’s Goddard Space Flight Center in Greenbelt, Maryland. NASA’s IMERG or Integrated Multi-satellitE Retrievals for GPM were used to estimate the total amount of rain that Super-typhoon Nock-ten dropped from Dec. 23 through Dec. 27 as it approached and traveled through the Philippines and into the South China Sea.

The IMERG analysis showed estimated rainfall totals from Nock-ten were as high as over 350 mm (13.8 inches) of rain in a large area extending from the Philippine island of Mindoro to the Philippine Sea over Dec. 25 and 26.

Once Nock-ten emerged in the South China Sea vertical wind shear weakened the storm. By Dec. 28 at 0300 UTC (Dec. 27 at 10 p.m. EST), the Joint Typhoon Warning Center (JTWC) issued their final warning on the system. At that time, Nock-ten had weakened to a depression and was located near 12.9 degrees north latitude, and 113.3 degrees east longitude. That’s about 407 nautical miles east-northeast of Ho Chi Minh City, Vietnam.

The JTWC expects Nock-ten to dissipate later on Dec. 28 or by Dec. 29.