Orbit 136 took LRO over the Imbrian-aged Compton Crater (162 km diameter) at an altitude of 172 kilometers. At this height, large boulders can be seen casting shadows, especially on the rims of the numerous secondary impacts that cover this ancient surface. But there is more to this image than craters and boulders.

In the upper part, the western edge of Compton’s huge central peak is visible. The wide, sloping flat floored trough (or graben) records a period of uplift of the crater floor. The uplift caused the floor to break and pull apart, forming the graben. The cause of the uplift and fracture of crater floors is not yet fully understood. One possibility is the slow readjustment of the crust after the crater-forming impact. Asteroids and comets strike the Moon at speeds greater than 15 km/second. So much energy is released that rock behaves as a plastic for a brief instant – the crust is pushed down.

Over time the crust relaxes and uplifts towards its original position, fracturing lava flows that were erupted and hardened after the impact. Another idea concerns the intrusion of lava into the shallow subsurface. As this magma follows existing cracks, it exerts pressure on the surrounding rock causing uplift and more fracturing. Unraveling the origin of lunar tectonic features like this one is a primary focus of LROC science team. 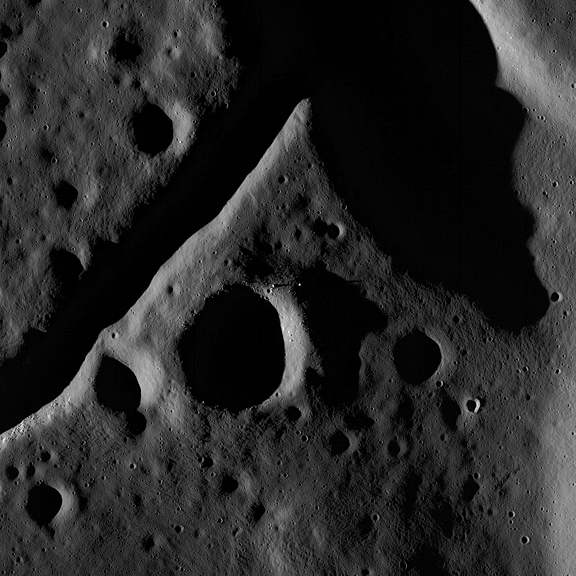