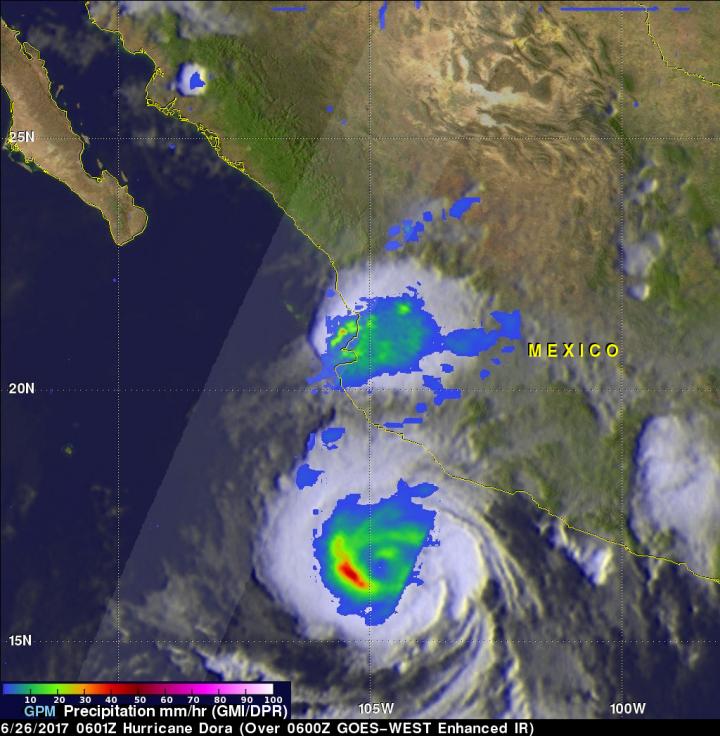 Now a tropical storm, Hurricane Dora has been skirting southwestern Mexico’s coast since it formed and has transported tropical moisture onshore that has produced some heavy rain showers. The Global Precipitation Measurement mission or GPM core satellite has analyzed those rainfall rates.

The GPM core observatory satellite flew over Mexico’s Pacific Ocean Coast on June 26, 2017 at 0601Z (2:01 a.m. EDT). At that time Dora was moving toward the west-northwest parallel to Mexico’s coastline and had just been upgraded to a hurricane. GPM’s Microwave Imager (GMI) showed that rain was falling at a rate of over 2 inches (50.8 mm) per hour southwest of Dora’s eye.

GPM’s Dual-Frequency Precipitation Radar (DPR) swath covered an area west and north of hurricane Dora. GPM’s Precipitation Radar (DPR) scanned intense storms located over Mexico’s coast north of the hurricane’s center and found rainfall occurring there at a rate of 1.4 inches (35 mm) per hour. Heaviest rainfall occurred at a rate of over 2.4 inches (60.5 mm) per hour in Dora’s southwestern quadrant.

At NASA’s Goddard Space Flight Center in Greenbelt, Maryland where the rainfall analysis was conducted, GPM data was used to also create at 3-D look at the hurricane. The GPM 3-D scan showed that a few of these thunderstorms had cloud tops reaching altitudes higher than 9.9 miles (15.9 km). Downpours in these storms were returning radar reflectivity values greater than 55dBZ to the satellite. GPM is a joint mission between NASA and the Japanese space agency JAXA.

At 5 a.m. EDT (0900 UTC) on June 28, the center of Tropical Storm Dora was located near latitude 19.8 degrees north latitude and 113.1 degrees west longitude. That’s about 295 miles (480 km) southwest of the southern tip of Baja California, Mexico. Dora is moving toward the west-northwest near 10 mph (17 kph), and this motion is expected to continue through Thursday.

Maximum sustained winds have decreased to near 40 mph (65 kph) with higher gusts. Additional weakening is forecast. The estimated minimum central pressure is 1005 millibars.

NOAA’s National Hurricane Center noted in the 5 a.m. EDT, June 28 discussion “Microwave images indicate that Dora stopped producing deep convection soon after 0000 UTC (8 p.m. EDT on June 27), and all cloud tops warmed above minus 50 degrees Celsius by 0245 UTC (10:45 p.m. EDT on June 27). The circulation now consists of a swirl of low- to mid-level clouds. Deep convection is unlikely to return due to cold sea surface temperatures, and Dora is forecast to degenerate to a remnant low later this morning or this afternoon.”