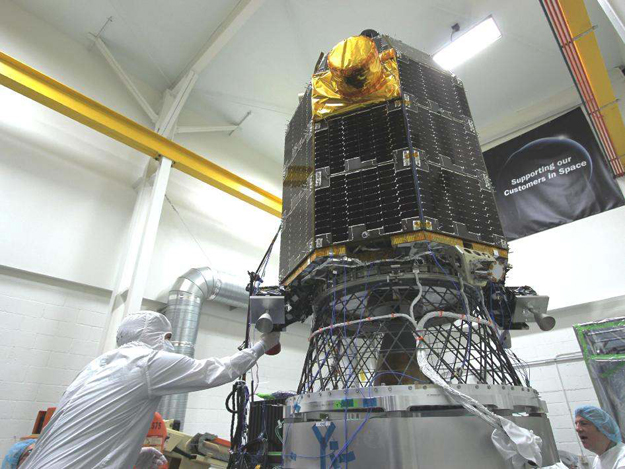 NASA’s Lunar Atmosphere and Dust Environment Explorer (LADEE) Observatory is mounted on the vibration table prior to the start of testing, and technicians are removing the protective covers from the delicate thrusters in preparation to begin vibration testing.

Engineers at NASA’s Ames Research Center, Moffett Field, Calif., have completed all of the mechanical tests of NASA’s Lunar Atmosphere and Dust Environment Explorer (LADEE) spacecraft. Engineers next will complete preparations to transport the spacecraft back to Ames from the National Technical Systems mechanical testing facility in Santa Clarita, Calif. LADEE is a robotic mission that will orbit the moon to gather detailed information about the lunar atmosphere, conditions near the surface and environmental influences on lunar dust.

The mechanical testing phase simulates the loud shaking conditions LADEE must face during its launch, and includes acoustic, vibration, and shock. During the acoustic testing, which took place first, a large horn blasted intense sound at the observatory to simulate the roar of the rocket at launch. The second test involved shaking the observatory at different frequencies and accelerations on a large platform, to simulate the vibration of the rocket as it climbs to space. The third test simulated the shock that occurs when LADEE separates from the upper stage of the rocket and begins its journey to the moon.

After returning to Ames, LADEE was placed back in the cleanroom. Engineers then replaced some components used during mechanical testing, including mass models of the transponder and two of the Lunar Laser Communication Demonstration modules. Most of the accelerometers used to record data during the mechanical testing were replaced with temperature sensors to be used during the thermal-vacuum tests, the next major test phase scheduled in the spring.

During thermal-vacuum testing, the spacecraft will be placed inside a heater cage inside a chamber. The atmosphere will be pumped down to create a vacuum and cooled to simulate the environment of space. The heater cage is turned on and off during the testing to simulate the heating of the sun and moon during different phases of the mission.