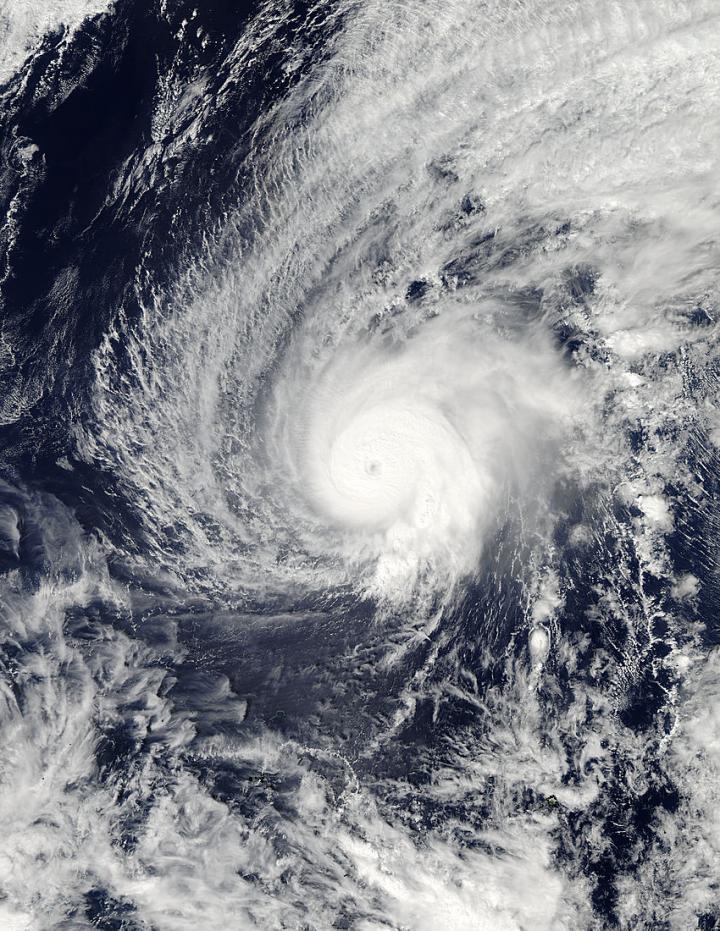 The Tropical Rainfall Measuring Mission or TRMM satellite and the Global Precipitation Measurement or GPM core satellites can calculate rainfall rates occurring in a storm from their orbits in space. TRMM and GPM both saw moderate rainfall occurring in Typhoon Higos as it moved over open waters of the Northwestern Pacific Ocean.

Both TRMM and GPM are managed by NASA and the Japan Aerospace Exploration Agency called JAXA.

Both TRMM and the GPM core observatory satellite had good looks at Higos’ rainfall on February 9, as the passed overhead. Rainfall rates were derived from GPM’s Microwave Imager (GMI) at 0206 UTC and the TRMM Microwave Imager (TMI) three hours later at 0546 UTC. GPM’s GMI measured rain falling at a rate of over 35.5 mm (1.3 inches) southwest of the center of circulation and TRMM’s TMI measured rain falling at the same rate.

On Feb. 10, 2015 at 03:10 UTC (Feb. 9 at 10:10 p.m. EST) the Moderate Resolution Imaging Spectroradiometer (MODIS) instrument aboard NASA’s Aqua satellite captured a visible image of Tropical Cyclone Higos as its eye was filling in with clouds.

At that time, the Joint Typhoon Warning Center (JTWC) noted that animated enhanced infrared satellite imagery showed that Higos had started to weaken, and that the eye feature had dissipated. In addition, deep (strong) convection (rapidly rising air that forms the thunderstorms that make up a tropical cyclone) had become less organized.

A couple of factors are expected to continue weakening Higos and bring it to an end in three days, according to JTWC. Decreasing ocean heat and the possibility of dry air moving into the storm are expected to lead to Higos’ demise by Feb. 13.

The JTWC forecast indicates that Higos will begin moving to the northeast and weaken while staying over the open waters of the Pacific Ocean and well northeast of Guam.