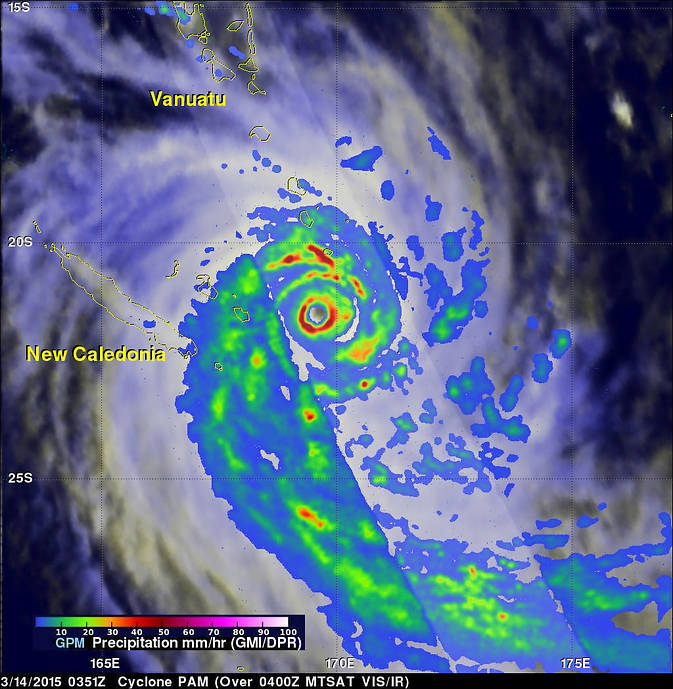 As one of the strongest cyclones every recorded in the South Pacific Ocean, Cyclone Pam devastated the island archipelago of Vanuatu. The Global Precipitation Measurement or GPM core observatory provided data on rain rates throughout the storm. At the end of Pam’s life on March 17, NASA’s RapidScat provided a look at the winds of the waning storm.

As the cyclone bore down on Vanuatu’s central islands on the afternoon (local time) of March 13, 2015, Pam’s maximum sustained winds were estimated to have increased to 270 kph (~167 mph) by the U.S. Joint Typhoon Warning Center (JTWC), making it a category 5 storm on the U.S. Saffir-Simpson Wind Scale.

The storm caused immense, widespread damage with the islands of Erromango and Tanna suffering a direct hit.  Although damage is still being assessed, the number of reported fatalities fortunately has been rather low at 11  considering the power of the storm.

NASA’s GPM Core observatory satellite passed over Pam as the cyclone began pulling away from Vanuatu on the 14th.  The image was taken at 03:51 UTC (2:51 p.m. local time) on March 14, 2015 and showed rain rates within Cyclone Pam observed from GPM’s microwave (GMI, in the outer swath) and radar (DPR, inner swath) instruments.  GPM showed that Pam was still a very powerful storm.  A well-defined, closed inner eyewall denoted by the annulus of intense rain rates up to 50 mm/2 inches per hour, is indicative of a well-formed intense cyclonic circulation.  Typically the faster the winds, the more symmetrical the precipitation features around the storm’s center.  At that time, Pam’s maximum sustained winds were still estimated at 135 knots (~155 mph) by JTWC, putting it near the top of the Saffir-Simpson category 4 scale.

TRMM and GPM are joint missions between NASA and the Japanese space agency JAXA.

After the GPM image was taken, Pam continued moving southward, tracking east of New Caledonia, and continued to weaken further.

By March 17, Pam had already moved past northern New Zealand and had become an extra-tropical cyclone.

The RapidScat instrument aboard the International Space Station (ISS) measures surface winds. When the ISS passed over Extra-tropical Cyclone Pam on March 17 RapidScat gathered data on surface winds that showed the strongest winds stretched over the northern quadrant and were near 25 m/s (56 mph/90 kph). Pam continued to weaken while moving in a southerly direction on March 18 through the southern Pacific Ocean.