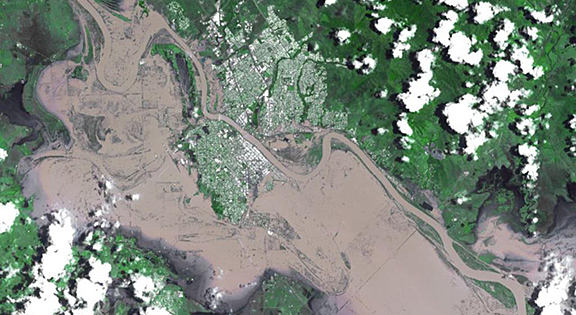 The current La Nina in the Pacific Ocean, one of the strongest in the past 50 years, continues to exert a powerful influence on weather around the world, affecting rainfall and temperatures in varying ways in different locations.

For Australia, La Nina typically means above-average rains, and the current La Nina is no exception. Heavy rains that began in late December led to the continent’s worst flooding in nearly a half century, at its peak inundating an area the size of Germany and France combined. The Associated Press reports about 1,200 homes in 40 communities are underwater and about 11,000 others are damaged, resulting in thousands of evacuations and 10 deaths to date.

On Jan. 7, 2011, the Advanced Spaceborne Thermal Emission and Reflection Radiometer (ASTER) instrument on NASA’s Terra spacecraft captured this image of the inundated city of Rockhampton, Queensland, Australia. With a population of 75,000, Rockhampton is the largest city affected by the current flooding. Torrential rains in northeastern Australia caused the Fitzroy River to overflow its banks and flood much of the city and surrounding agricultural lands. Both the airport and major highways are underwater, isolating the city.

In this natural color rendition, muddy water is brown, and shallow, clearer water is gray. Vegetation is depicted in various shades of green, and buildings and streets are white. The image is located at 23.3 degrees south latitude, 150.5 degrees east longitude, and covers an area of 22 by 28.1 kilometers (13.6 by 17.4 miles). For more information, visit: http://photojournal.jpl.nasa.gov/catalog/PIA13775. Full image and caption