The approach that the National Aeronautics and Space Administration (NASA) is using to integrate its three human spaceflight programs into one system ready for launch offers some benefits, but it also introduces oversight challenges. To manage and integrate the three programs—the Space Launch System (SLS) vehicle; the Orion crew capsule; and supporting ground systems (EGS)— NASA’s Exploration Systems Development (ESD) organization is using a more streamlined approach than has been used with other programs, and officials GAO spoke with believe that this approach provides cost savings and greater efficiency. However, GAO found two key challenges to the approach:

– The approach makes it difficult to assess progress against cost and schedule baselines. SLS and EGS are baselined only to the first test flight. In May 2014, GAO recommended that NASA baseline the programs’ cost and schedule beyond the first test flight. NASA has not implemented these recommendations nor does it plan to; hence, it is contractually obligating billions of dollars for capabilities for the second flight and beyond without establishing baselines necessary to measure program performance.

– The approach has dual-hatted positions, with individuals in two programmatic engineering and safety roles also performing oversight of those areas. As the image below shows, this presents an environment of competing interests. 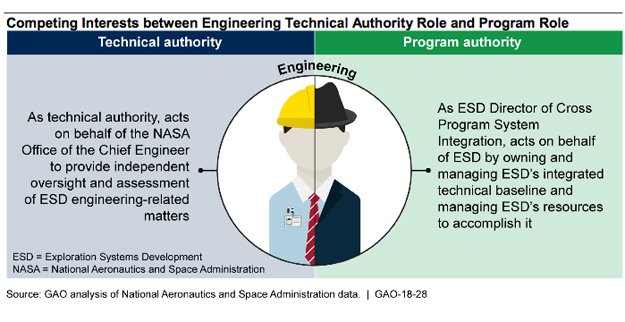 These dual roles subject the technical authorities to cost and schedule pressures that potentially impair their independence. The Columbia Accident Investigation Board found in 2003 that this type of tenuous balance between programmatic and technical pressures was a contributing factor to that Space Shuttle accident.

NASA is undertaking a trio of closely related programs to continue human space exploration beyond low-Earth orbit. All three programs (SLS, Orion, and EGS) are working toward a launch readiness date of no earlier than October 2019 for the first test flight. Each program is a complex technical and programmatic endeavor. Because all three programs must work together for launch, NASA must integrate the hardware and software from the separate programs into a working system capable of meeting its goals for deep space exploration.

The House Committee on Appropriations report accompanying H.R. 2578 included a provision for GAO to assess the progress of NASA’s human space exploration programs. This report assesses (1) the benefits and challenges of NASA’s approach for integrating these three programs and (2) the extent to which cross-program risks could affect launch readiness. GAO examined NASA policies, the results of design reviews, risk data, and other program documentation and interviewed NASA and other officials.

Congress should consider directing NASA to establish baselines for SLS and EGS’s missions beyond the first test flight. NASA’s ESD organization should no longer dual-hat officials with programmatic and technical authority responsibilities. NASA partially concurred with our recommendation and plans to address it in the next year. But NASA did not address the need for the technical authority to be independent from programmatic responsibilities for cost and schedule. GAO continues to believe that this component of the recommendation is critical.