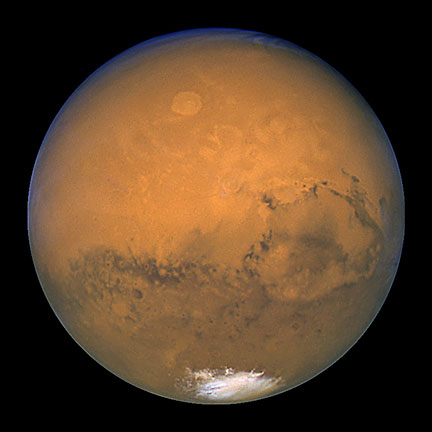 Many small, dark, circular impact craters can be seen, attesting to the Hubble telescope’s ability to reveal fine detail on the planet’s surface. One of the most striking is the 270-mile- (450-km-) diameter Huygens crater, seen near the centerof the image.

The two dominant dark swatches seen on this part of the planet are classical regions labeled by early Mars observers. The “shark-fin” shape to the right is Syrtis Major. The horizontal lane to the left is Sinus Meridani. One of NASA’s Mars Exploration Rovers, named “Opportunity,” will land at the western end of this region in January 2004.

The picture shows that it is a relatively warm summer on Mars, as evident in the lack of water-ice clouds at mid-latitude, and the receding southern polar cap. Ice on the rugged topography gives a somewhat ragged, scalloped look. Up north, at the top of the disk where it is Martian winter, a frigid polar hood of clouds covers the northern polar cap and surrounding region.

Even in the relatively balmy Southern Hemisphere, daytime highs are just above freezing in the Hellas impact basin, the circular feature near the image center. Hellas is nearly 5 miles deep (8 km). Hellas is like Death Valley – except that Mars is much drier than even Death Valley. Having a diameter of 1,100 miles (1,760 km), Hellas was formed when an asteroid slammed into Mars billions of years ago. Many summer dust storms originate in this basin, though it is remarkably clear of dust in this Hubble image.

Mars and Earth have a “close encounter” about every 26 months. These periodic encounters are due to the differences in the two planets’ orbits. Earth goes around the Sun twice as fast as Mars, lapping the red planet about every two years. Both planets have elliptical orbits, so their close encounters are not always at the same distance. In its close encounter with Earth in 2001, for example, Mars was about 9 million miles farther away. Because Mars will be much closer during this year’s close approach, the planet appears 23 percent bigger in the sky.

This photograph is a color composite generated from observations taken with blue, green, and red filters. The resolution is 8 miles (12 km) per pixel.