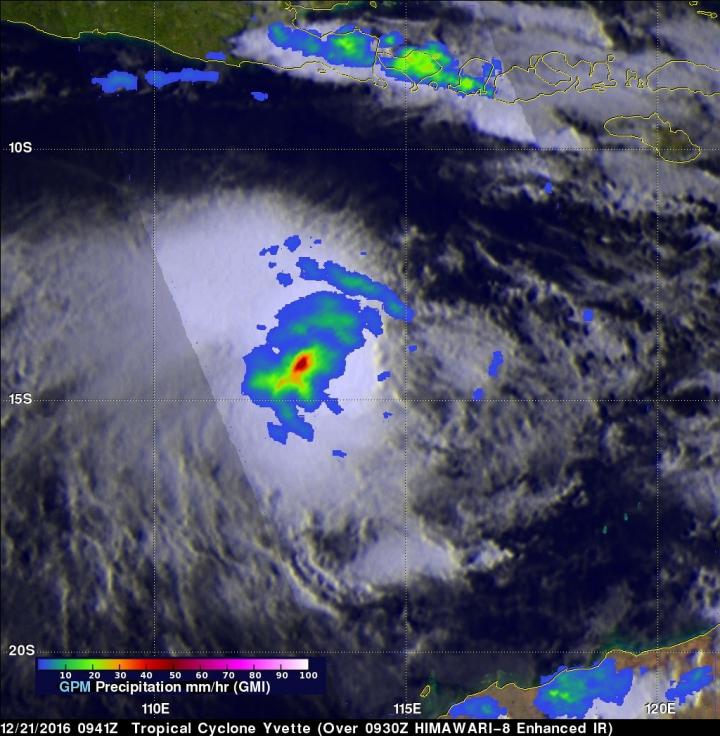 NASA found that the area of heavy rainfall had increased in size as Tropical Cyclone Yvette continued to intensify in the Southern Indian Ocean.

The Global Precipitation Measurement mission or GPM core observatory satellite flew over tropical cyclone Yvette, located off the northwestern coast of Australia on Dec. 21, 2016 at (4:41 a.m. EST) 0941 UTC. Maximum sustained winds had increased to about 40 knots (46 mph). The GPM satellite’s Microwave Imager (GMI) revealed that the area of continuous rainfall around Yvette’s center of circulation had increased in size. Convective storms were shown by GPM to be dropping rain at rates of over 60 mm (2.4 inches) per hour. GPM is a joint mission between NASA and the Japanese space agency JAXA.

On Dec. 22 at 4 a.m. EST (0900 GMT) Yvette’s maximum sustained winds had increased to 52 mph (45 knots/83 kph). It was centered near 14.2 degrees south latitude and 114.3 degrees east longitude, about 441 nautical miles northwest of Port Hedland, Australia. Yvette was moving east at 1.5 mph (1 knot/1.8 kph). Yvette has started to move east and is expected to turn to the southeast later in the day.

For forecast updates from Australia’s Bureau of Meteorology, visit: http://www.bom.gov.au/cyclone/index.shtml.

The storm will accelerate and make landfall on Christmas Day (GMT) between Broome and Port Hedland.