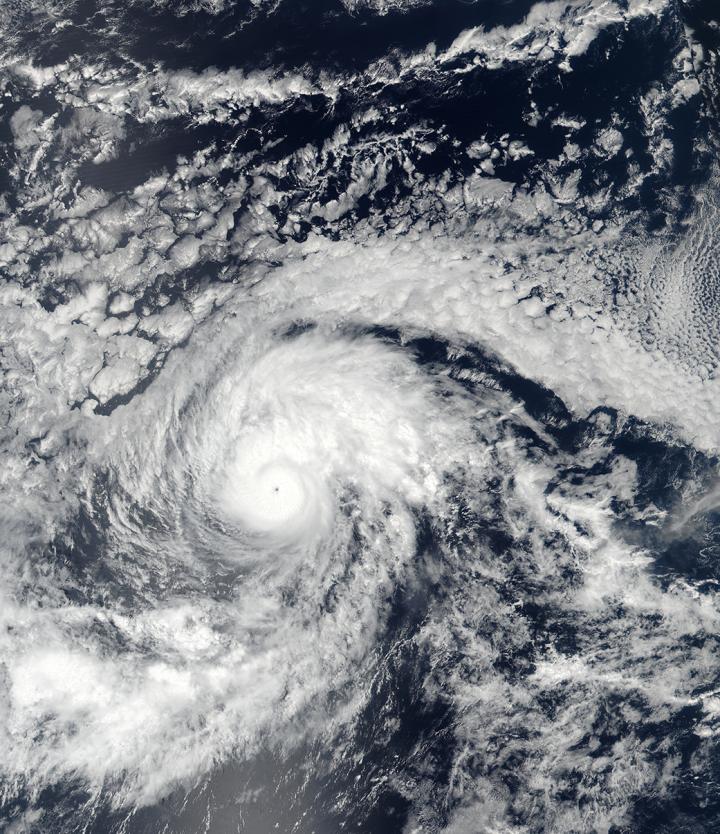 Over the course of three days, Otis transitioned from a struggling tropical depression into a powerful hurricane in the Eastern Pacific Ocean. NASA-NOAA’s Suomi NPP satellite captured an image of Hurricane Otis, showing a pinhole eye.

That’s when the Visible Infrared Imaging Radiometer Suite (VIIRS) instrument aboard NASA-NOAA’s Suomi NPP satellite flew over Otis captured a visible light image of the storm. The VIIRS image showed a pinhole eye surrounded by a thick band of powerful thunderstorms. From that pinhole eye, hurricane force winds only extend outward up to 25 miles (35 km) from the center and tropical-storm-force winds extend outward up to 70 miles (110 km).

The VIIRS image also showed a large, thick outer band of thunderstorms circling the northern quadrant of the storm.

At the time, the National Hurricane Center (NHC) discussion said “Recent Advanced Scatterometer (ASCAT) instrument data confirms that the wind field of the system is extremely compact.” The main objective of ASCAT is the measurement of wind speed and direction over the oceans. The Advanced Scatterometer (ASCAT) winds products are processed by NOAA/NESDIS utilizing measurements from the scatterometer instrument aboard the EUMETSAT Metop satellites.

Otis was moving toward the north near 6 mph (9 kph). NHC said a slower northward motion is expected later today, followed by a turn to the west and southwest by late Tuesday, Sept. 19. Maximum sustained winds have decreased to near 100 mph (155 kph) with higher gusts. Rapid weakening is forecast during the next 48 hours.

For updates on Otis, visit: http://www.nhc.noaa.gov