Tetiaroa Island is part of the Society Islands archipelago in the southern Pacific Ocean, one of several island clusters in French Polynesia. Tetiaroa is an atoll comprised of thirteen small islets (or motus). This astronaut photograph illustrates the typical circular appearance of a fully developed atoll.

The ring of islands–covered in green vegetation and white-to-tan sandy beaches–develops on coral reefs, which originally form around a volcanic island. As the volcanic island gradually disappears due to subsidence and erosion, the coral reefs continue to grow upwards. Over time, the central volcanic island is completely submerged, leaving a ring of coral reefs and islands that surround a lagoon. The shallow lagoon waters appear blue-green in this image, and contrast with darker and deeper Pacific Ocean waters surrounding the atoll.

One of the motus in the southern portion of the atoll, Tahuna Rahi, is a protected bird sanctuary, and it is the nesting site of red- and brown-footed boobies, frigatebirds, and terns (among other species). Access to the atoll is via boat, as the airstrip was closed in 2004 due to safety and security concerns.

Tetiaroa Island is also known as “Marlon Brando’s Island.” The late film star purchased the atoll from the French Polynesian government between 1966 and 1967. While the motus were his property, the government retained the rights to the coral reefs and lagoons to preserve control of marine resources. Following Brando’s death in 2004, ownership of the approximately 8-kilometer-wide atoll passed into other private hands, and there are now plans to build a luxury resort among the islets. 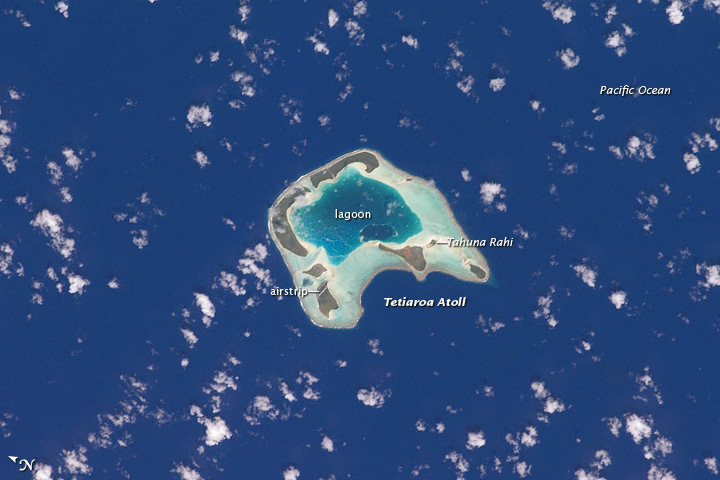 Astronaut photograph ISS018-E-24351 was acquired on January 27, 2009, with a Nikon D2Xs digital camera fitted with an 180 mm lens, and is provided by the ISS Crew Earth Observations experiment and the Image Science & Analysis Laboratory, Johnson Space Center.The image in this article has been cropped and enhanced to improve contrast. Lens artifacts have been removed. The International Space Station Program supports the laboratory to help astronauts take pictures of Earth that will be of the greatest value to scientists and the public, and to make those images freely available on the Internet. Additional images taken by astronauts and cosmonauts can be viewed at the NASA/JSC Gateway to Astronaut Photography of Earth. Caption by William L. Stefanov, NASA-JSC.