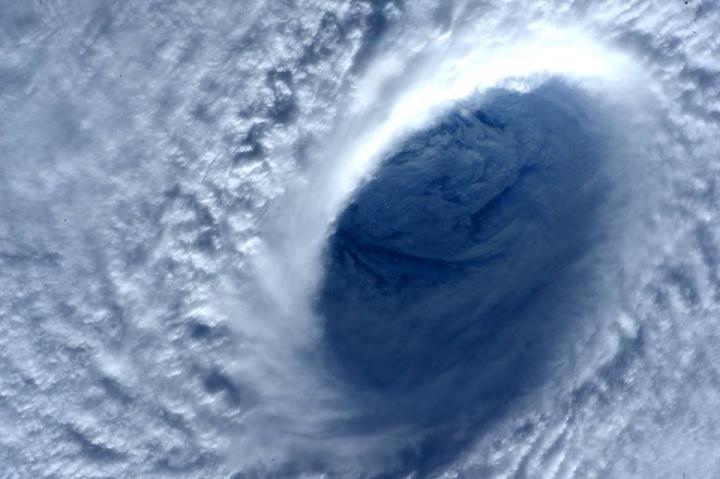 NASA’s fleet of satellites and instruments in space have covered Super Typhoon Maysak’s rainfall, winds, clouds and an astronaut about the International Space Station captured a close-up photo of the storm’s eye.

On April 1 at 01:35 UTC (March 31 at 9:35 p.m. EDT), the Moderate Resolution Imaging Spectroradiometer or MODIS instrument aboard NASA’s Terra satellite captured a stunning view of Super Typhoon Maysak in the Northwestern Pacific Ocean. The MODIS image clearly showed its eye and bands of powerful thunderstorms circling the eye, and wrapping into it from the east and west.

The Global Precipitation Measurement or GPM core observatory’s Microwave Imager (GMI) revealed that Maysak was dropping rain at a rate of over 70 mm (2.8 inches) per hour northwest of a well-defined eye on April 1 at 12:15 UTC (8:15 a.m. EDT). The 12:11 UTC (8:11 a.m. EDT) GPM microwave image also showed the weakening of the deep convection on the southern edge of the storm.

Super typhoon Maysak’s winds were near 130 knots (~150 mph) and the storm was north of Palau in the western Pacific Ocean when the Global Precipitation Measurement of GPM core observatory satellite flew overhead on April 1, 2015 at 1215 UTC (8:15 a.m. EDT). GPM’s Microwave Imager (GMI) revealed that Maysak was dropping rain at a rate of over 70 mm (2.8 inches) per hour northwest of a well-defined eye.

The Joint Typhoon Warning Center (JTWC) noted that Maysak appears to be “weakening slightly, as can be seen by the increase in dry air entrainment (moving into the system) seen in the water vapor and total perceptible water loops (animated imagery).”

The JTWC forecast calls for Maysak to move northwest toward the Central Luzon Region of the Philippines. The storm is not expected to intensify further and begin weakening in the next day as vertical wind shear increases. JTWC is forecasting a landfall in Central Luzon on April 4.

Currently, there are no warnings posted in the Philippines, but residents should make preparations for the storm’s approach. For updates on warnings and watches, visit: http://www.pagasa.dost.gov.ph/index.php/tropical-cyclones/weather-bulletin