This map of the surface of Saturn’s moon Dione illustrates the regions that will be imaged by Cassini during the spacecraft’s very close flyby of the moon on Oct. 11, 2005. At closest approach, the spacecraft is expected to pass approximately 500 kilometers (310 miles) above the moon’s surface. Dione is 1,126 kilometers (700 miles) across.

The colored lines delineate the regions that will be imaged at differing resolutions, listed in the legend at the bottom.

Imaging scientists expect the Dione encounter to be one of the highlights of Cassini’s mission. In terms of planning, this particular flyby is perhaps the most sophisticated yet undertaken by the Cassini imaging team. The timing of the imaging sequence has been optimized to within seconds, relative to the spacecraft’s pointing during the encounter. 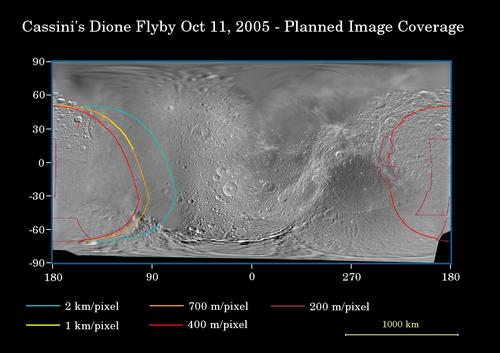 As Cassini approaches Dione, the cameras will capture regional-scale, medium resolution mosaics, with some coverage of the moon’s relatively poorly imaged leading hemisphere (the region centered on 90 degrees longitude). Planned inbound coverage also includes high-resolution images of the south pole and the well-known streaked terrain on Dione’s trailing hemisphere. The previous flyby showed the markings to be an elaborate system of braided tectonic fractures.

During the outbound portion of the flyby, Cassini will image a crescent Dione as the moon recedes into the distance. While staring at the moon’s dark side, Cassini will take images using long exposure times, in order to see terrain that is dimly illuminated by reflected light from Saturn. Such a technique was successfully employed during the New Year’s Eve 2004 encounter with Iapetus.

This map was made from images obtained by both the Cassini and Voyager spacecraft.