This map of Titan’s surface illustrates the regions that will be viewed by Cassini’s imaging cameras during the spacecraft’s close flyby of Titan on Oct. 28, 2005. At closest approach, the spacecraft is expected to pass approximately 1,400 kilometers (800 miles) above the moon’s surface.

The colored lines delineate the regions that will be imaged at differing resolutions.

The highest resolution imaging coverage during the flyby will be of the eastern portion of the dark region called Shangri-la and the boundary between Shangri-la and bright Xanadu. Several of the major “islands” in eastern Shangri-la will be featured, including faculae (or bright spots) which have the provisional names Kerguelen, Vis, Crete and Tortola. These bright features on Titan are named for island features from Earth.

The map shows only brightness variations on Titan’s surface (the illumination is such that there are no shadows and no shading due to topographic variations). Previous observations indicate that, due to Titan’s thick, hazy atmosphere, the sizes of surface features that can be resolved are a few to five times larger than the actual pixel scale labeled on the map. 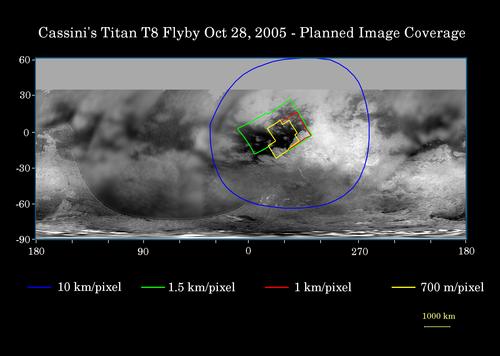 The images for this global map were obtained using a narrow band filter centered at 938 nanometers – a near-infrared wavelength (invisible to the human eye) at which light can penetrate Titan’s atmosphere to reach the surface and return through the atmosphere to be detected by the camera. The images have been processed to enhance surface details.

For more information about the Cassini-Huygens mission visit http://saturn.jpl.nasa.gov .