This image shows a crater, approximately 60 kilometers (37 miles) in diameter, on the very eastern end of the radar image strip taken by the Cassini orbiter on its third close flyby of Titan on Feb. 15.

The appearance of the crater and the extremely bright (hence rough) blanket of material surrounding it is indicative of an origin by impact, in which a hypervelocity comet or asteroid, in this case, roughly 5-10 kilometers (3-6 miles) in size, slammed into the surface of Titan.

The bright surrounding blanket is debris, or ejecta, thrown out of the crater. The asymmetric appearance of this ejecta blanket could be an effect of atmospheric winds associated with the impact itself. Although clearly formed by impact, the feature lacks a central peak, suggesting that it has been eroded or otherwise modified after formation. Rainfall, wind erosion, and softening of the solid material in which the crater formed are all possible processes that might have altered this impact feature. 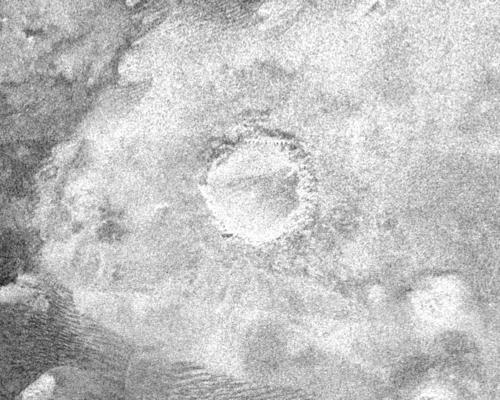 The Cassini-Huygens mission is a cooperative project of NASA, the European Space Agency and the Italian Space Agency. The Jet Propulsion Laboratory, a division of the California Institute of Technology in Pasadena, manages the Cassini-Huygens mission for NASA’s Science Mission Directorate, Washington, D.C. The Cassini orbiter and its two onboard cameras were designed, developed and assembled at JPL. The radar instrument team is based at JPL, working with team members from the United States and several European countries.