Zigzagging kinks and knots dance around Saturn in this movie of the F ring from Cassini. From a great distance, as during Cassini’s initial approach to Saturn in mid-2004, the F ring appears as a faint, knotted strand of material at the outer fringe of Saturn’s immense ring system. From this close vantage point, just after the spacecraft rounded the planet to begin its second orbit, the F ring resolves into several ringlets with a bright central core. The core of the F ring is about 50 kilometers (31 miles) wide and is located at a distance of approximately 80,100 kilometers (49,800 miles) from Saturn’s cloud tops.

Scientists have only a rough idea of the lifetime of features like knots and clumps in Saturn’s rings, and studies of images, such as those comprising this movie, will help them piece together this story.

The view here is from Cassini’s southern vantage point, below the ringplane. During the course of the movie sequence, Cassini was headed on a trajectory that took the spacecraft away from the planet and farther south, so that the rings appear to tilt farther upward. To help visualize this, note that the top portion of the F ring is closer to the spacecraft, while the bottom portion is farther away and curves around the far side of Saturn.

The movie consists of 44 frames taken three minutes apart, so that the span of time represented in the sequence is almost exactly two hours, or about one-eight of a Saturn rotation. The images that comprise this movie sequence were taken in visible light with the Cassini spacecraft narrow angle camera on Oct. 28, 2004, and at distances ranging from approximately 516,000 kilometers (321,000 miles) to 562,000 kilometers (349,000 miles). No enhancement was performed on the images. 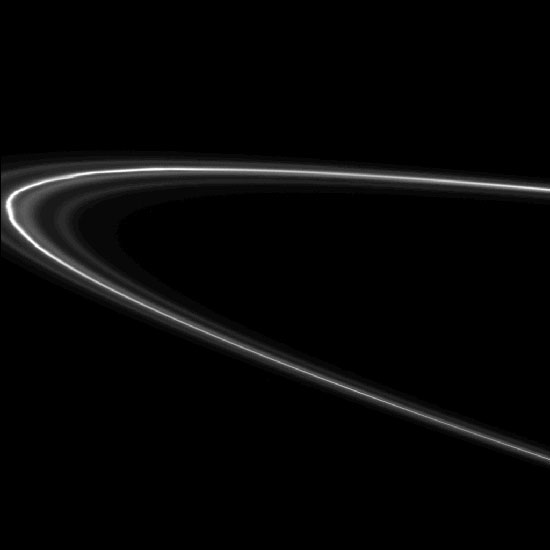