These set of images were created during the Phoebe flyby on June 11, 2004. The images show the location and distribution of water-ice, ferric iron, carbon dioxide and an unidentified material on the tiny moon of Saturn. The first image was taken with Cassini’s narrow angle camera and is shown for comparison purposes only. The other images were taken by the visual and infrared mapping spectrometer onboard Cassini.

The infrared image of Phoebe obtained at a distance of about 16,000 km (10,000 miles) shows a large range of bright and dark features. The resolution of the image is about 4 km (2.5 miles). carbon dioxide on the surface of Phoebe is distributed globally, although it appears to be more prevalent in the darker regions of the satellite.

The existence of carbon dioxide strongly suggests that Phoebe did not originate in the asteroid belt, but rather in much colder regions of the Solar System such as the Kuiper Belt. The Kuiper Belt is a vast reservoir of small, primitive bodies beyond the orbit of Neptune. An unidentified substance also appears to be more abundant in the darker regions.

A map showing the distribution of water ice (blue), ferric iron (red), which is common in minerals on Earth and other planets, and the unidentified material (green). Water ice is associated with the brighter regions, while the other two materials are more abundant in the darker regions. 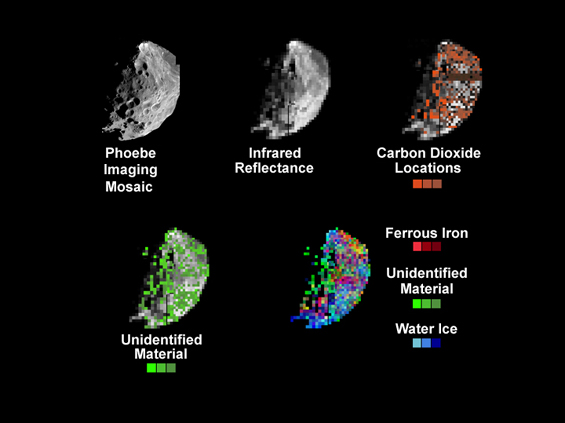