This map of the surface of Saturn’s moon Titan illustrates the regions that will be imaged by Cassini during the spacecraft’s fourth (and third very close) flyby of the smoggy moon on Feb. 15, 2005. At closest approach, Cassini is expected to pass approximately 1,580 kilometers (982 miles) above the moon’s surface.

The colored lines delineate the regions that will be imaged at differing resolutions. The lower resolution imaging sequences (outlined in blue) are designed to study the atmosphere, clouds and surface in a variety of spectral filters. Other areas have been specifically targeted for creation of mosaics based on moderate resolution images of surface features. Two small areas (outlined in yellow) will be seen at high resolution by Cassini’s narrow angle camera, and will be jointly covered by the visual and mapping spectrometer experiment. These high resolution targets also overlap areas covered by the Cassini radar altimetry and synthetic aperture radar experiments.

The site where the Huygens probe landed in mid-January will be imaged at lower resolution during this flyby and is within the terrain in the extreme western part of the coverage area. The low-resolution imaging coverage will extend farther east than the previous two close flybys in October and December 2004. Some areas covered at moderate resolution during previous flybys have been targeted again to allow Cassini scientists to look for changes. 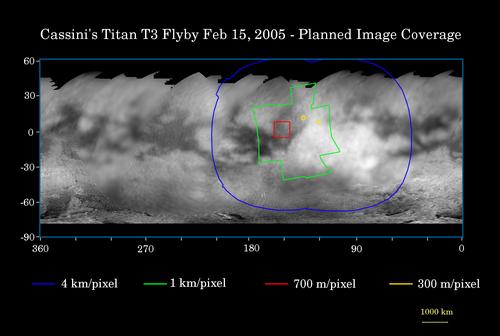 The map shows only brightness variations on Titan’s surface (the illumination is such that there are no shadows and no shading due to topographic variations). Previous observations indicate that, due to Titan’s thick, hazy atmosphere, the sizes of surface features that can be resolved are a few to five times larger than the actual pixel scale labeled on the map.

The map was made from global images taken in June 2004, at image scales of 35 to 88 kilometers (22 to 55 miles) per pixel, and south polar coverage from July 2004, at an image scale of 2 kilometers (1.3 miles) per pixel. The images were obtained using a narrow band filter centered at 938 nanometers — a near-infrared wavelength (invisible to the human eye) at which light can penetrate Titan’s atmosphere to reach the surface and return through the atmosphere to be detected by the camera. The images have been processed to enhance surface details.

It is currently northern winter on Titan, so the moon’s high northern latitudes are not illuminated, resulting in the lack of coverage north of 45 degrees north latitude. Clouds near the south pole (see http://photojournal.jpl.nasa.gov/catalog/PIA06110) have also been removed (south of -75 degrees).