This map of the surface of Saturn’s moon Enceladus illustrates the regions that will be imaged by Cassini during the spacecraft’s first very close flyby of the moon on Feb. 17, 2005. At closest approach, the spacecraft is expected to pass approximately 1,180 kilometers (733 miles) above the moon’s surface. Enceladus is 505 kilometers (314 miles) across.

The colored lines delineate the regions that will be imaged at differing resolutions.

The coverage at spatial resolution better than 200 meters (656 feet) per pixel primarily targets an area previously seen in NASA’s Voyager spacecraft images, but at lower resolution (around 1 kilometer or 0.6 miles per pixel). This high resolution coverage also includes areas in the southern latitudes that were not seen at all by Voyager. The primary purpose of this coverage is to provide detailed information about the nature of different terrain types, especially the smooth plains materials, cratered terrains and system of curvilinear fractures that appear to be tectonic in nature. 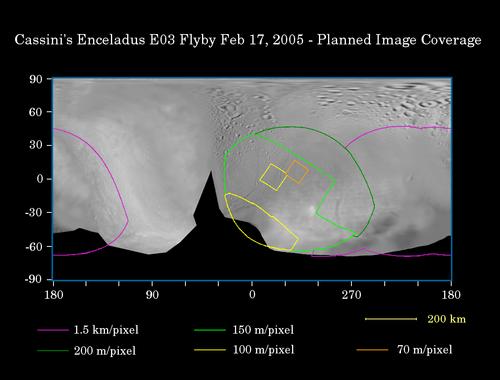 The highest-resolution coverage (i.e. better than 70 meters, or 230 feet per pixel) focuses on the detailed structure of prominent fractures in the smooth plains.

The map was made from images obtained by both the Cassini and Voyager spacecraft. The Cassini images used here were acquired on Jan. 15 and 16, 2005.