This image shows the warmest places in the south polar region of Saturn’s moon Enceladus. The unexpected temperatures were discovered by Cassini’s composite infrared spectrometer during a close flyby on July 14, 2005. The image shows how these temperatures correspond to the prominent, bluish fractures dubbed “tiger stripes,” first imaged by Cassini’s imaging science subsystem cameras. Working together the two teams were able to pinpoint the exact location of the warmest regions on Enceladus.

The composite infrared spectrometer instrument measured the infrared heat radiation from the surface at wavelengths between 9 and 16.5 microns within each of the 10 squares shown here. Each square is 6 kilometers (4 miles) across. The color of each square, and the number shown above it, describe the composite infrared spectrometer’s measurement of the approximate average temperature of the surface within that square. 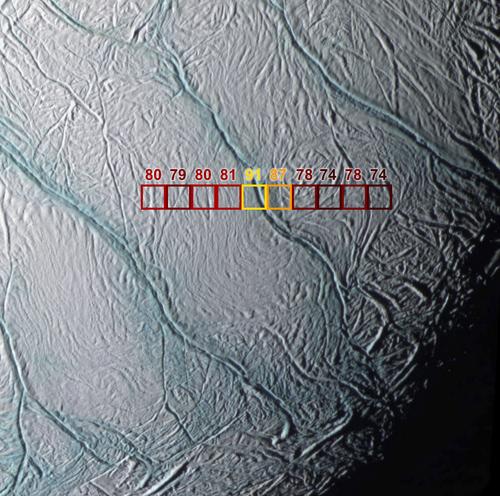 The warmest temperature squares, at 91 and 89 degrees Kelvin (minus 296 and minus 299 degrees Fahrenheit), are located over one of the “tiger stripe” fractures. They contrast sharply with the surrounding temperatures, which are in the range 74 to 81 degrees Kelvin (minus 326 to minus 313 degrees Fahrenheit). The detailed composite infrared spectrometer data suggest that small areas near the fracture are at substantially higher temperatures, well over 100 degrees Kelvin (minus 279 degrees Fahrenheit). Such “warm” temperatures are unlikely to be due to heating of the surface by the feeble sunlight striking Enceladus’ south pole. They are a strong indication that internal heat is leaking out of Enceladus and warming the surface along these fractures. Evaporation of this relatively warm ice probably generates the cloud of water vapor detected above Enceladus’ south pole by several other Cassini instruments. Scientists are unsure how the internal heat reaches the surface. The process might involve liquid water, slushy brine, or soft but solid ice.

The imaging science subsystem image is an enhanced color view with a pixel scale of 122 meters (400 feet) that was acquired at the same time as the composite infrared spectrometer data. It covers a region 125 kilometers (75 miles) across. The spacecraft’s distance from Enceladus was 21,000 kilometers (13,000 miles). The broad bluer fractures that can be seen running from the upper left to the lower right of the image are 1 to 2 kilometers (0.6 to 1.2 miles) wide and more than 100 kilometers (60 miles) long. The fractures are thought to be bluer than the surrounding surface because coarser-grained ice (which has a blue color just as thick masses of ice, like glaciers and icebergs, do on Earth) has been exposed in the fractures. The color image was constructed using an ultraviolet filter (centered at 338 nanometers) in the blue channel, a clear filter in the green channel, and an infrared filter (centered at 930 nanometers) in the red channel. The Cassini-Huygens mission is a cooperative project of NASA, the European Space Agency and the Italian Space Agency. The Jet Propulsion Laboratory, a division of the California Institute of Technology in Pasadena, manages the mission for NASA’s Science Mission Directorate, Washington, D.C. The Cassini orbiter was designed, developed and assembled at JPL. The composite infrared spectrometer team is based at NASA’s Goddard Space Flight Center, Greenbelt, Md. The imaging operations center is based at the Space Science Institute in Boulder, Colo. For more information about the Cassini-Huygens mission visit http://saturn.jpl.nasa.gov . The composite infrared spectrometer team homepage is http://cirs.gsfc.nasa.gov/ . The imaging team homepage is at http://ciclops.org .