The study of a planetary atmosphere like Saturn’s is quite different from studying solid surfaces, since atmospheres are dynamic and ever-changing. In this Cassini image, the large-scale curvilinear pattern suggests flow around the vortices in the center of the image. However, the fine-scale linear striations are themselves notable for their indication of the stability of the flow in this region.

Cassini imaging scientists make repeated observations — including making movies — of Saturn’s atmosphere in order to track storms and other features and watch how the planet’s dynamic atmosphere changes over time.

This image was taken with the Cassini spacecraft narrow angle camera on Dec. 6, 2004, at a distance of about 3.3 million kilometers (2 million miles) from Saturn through a filter sensitive to wavelengths of infrared light centered at 727 nanometers. The image scale is 39 kilometers (24 miles) per pixel. 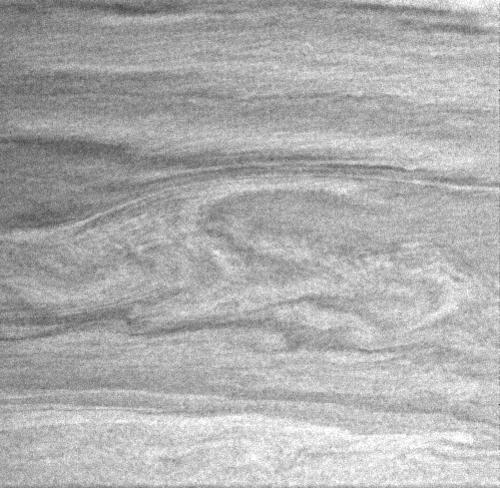