This image of Titan’s night side was taken during Cassini¿s very close flyby of the smoggy moon on Feb. 15, 2005.

The image shows Titan’s thick atmosphere illuminated from behind by sunlight. A detached haze layer is visible over the entire globe. The haze layer over the north polar region (at the top) has an unusual structure, a feature that imaging scientists have noticed in earlier flybys but do not yet fully understand.

The image was taken with the Cassini spacecraft wide angle camera through a filter sensitive to wavelengths of visible blue light centered at 460 nanometers. The image was acquired at a distance of approximately 134,000 kilometers (83,000 miles) from Titan and at a Sun-Titan-spacecraft, or phase, angle of 158 degrees. Resolution in the image is about 8 kilometers (5 miles) per pixel. 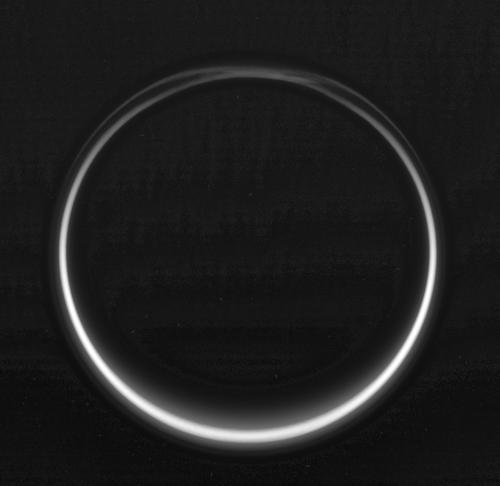