NASA Cassini Image: The Air Up There

This specially processed composite view reveals a tremendous amount of structure in the northern polar atmosphere of Titan. The hazes in Titan’s atmosphere are known to extend hundreds of kilometers above the surface.

Structure visible here could be due to multiple detached hazes, or waves in the atmosphere that propagate through stably stratified layers.

Ten images taken during a brief period were processed to enhance fine detail and then were combined to create this view. 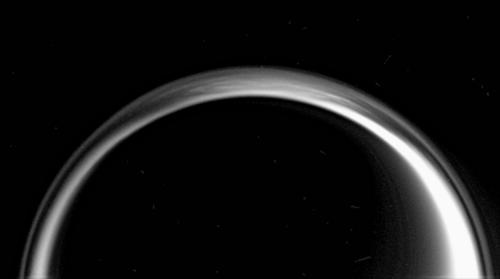 The images were taken in visible light with the Cassini spacecraft narrow-angle camera on Jan. 18, 2006 at a distance of approximately 2.2 million kilometers (1.4 million miles) from Titan and at a Sun-Titan-spacecraft, or phase, angle of 155 degrees. Image scale is 13 kilometers (8 miles) per pixel.