Three of Saturn’s moons appear almost like a string of pearls in this Cassini image, but looks are deceiving.

Moons visible in this image: Mimas (398 kilometers, or 247 miles across) at right, Pandora (84 kilometers, or 52 miles across) near center and Janus (181 kilometers, or 113 miles across) in the lower left corner. Mimas’ orbit inclination of 1.6 degrees relative to Saturn’s equator is enough to make it appear as if it orbits just beyond the F ring when viewed from this vantage point of 5 degrees below the rings. In fact, it is 34,000 kilometers (21,000 miles) more distant than Janus.

Contrast in the image was enhanced to make visible the faces of moons lit by reflected light from Saturn (their left sides). Notable here is the irregular shape of Janus, compared with larger, spherical Mimas. The bright B ring (at upper left) appears overexposed due to the extreme contrast enhancement.

The image was taken in visible light with the Cassini spacecraft narrow angle camera on Jan. 22, 2005, at a distance of approximately 2.7 million kilometers (1.7 million miles) from Saturn. The image scale is 16 kilometers (10 miles) per pixel. 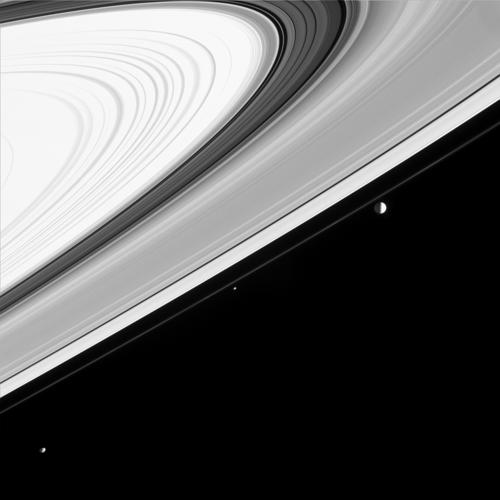