This view of the surface of Saturn’s moon Tethys, taken during Cassini’s close approach to the moon on Sept. 24, 2005, reveals an icy land of steep cliffs. The view is of the southernmost extent of Ithaca Chasma, in a region not seen by NASA’s Voyager spacecraft.

The ridges around Ithaca Chasma have been thoroughly hammered by impacts. This appearance suggests that Ithaca Chasma as a whole is very old.

There is brighter material in the floors of many craters on Tethys. That’s the opposite situation from Saturn’s oddly tumbling moon Hyperion, where dark material is concentrated in the bottoms of many craters. 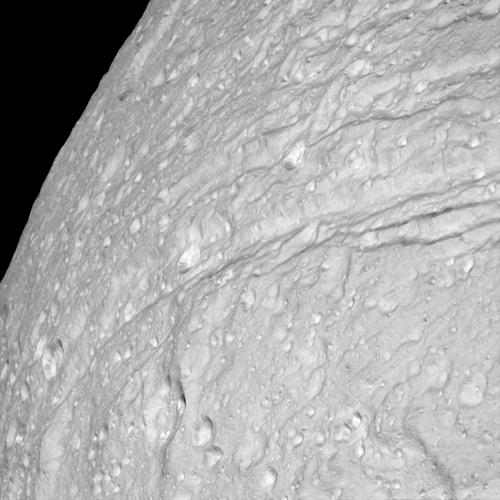 This view is centered on terrain at approximately 2.5 degrees south latitude and 352 degrees west longitude on Tethys. North on Tethys is toward the right in this view.

This clear filter view was obtained using the Cassini spacecraft narrow-angle camera at a distance of approximately 32,300 kilometers (20,000 miles) from Tethys and at a Sun-Tethys-spacecraft, or phase, angle of 20 degrees. Image scale is 190 meters (620 feet) per pixel.