Evidence of changing weather patterns in the skies over Titan’s southern region are revealed in these false color images obtained by the Cassini spacecraft’s visual infrared mapping spectrometer over two recent flybys of this largest of Saturn’s satellites. In the first image (left), obtained on the Oct, 26, 2004 Titan flyby, from a distance of some 200,000 kilometers (124,300 miles), Titan’s skies are cloud-free, except for a patch of clouds observed over the south pole near the bottom of the image. In contrast, the image on the right shows a recent view of this same area of Titan obtained seven weeks later on the second close Titan flyby on Dec. 13, 2004, from a distance of 225,000 kilometers (139,800 miles). This image clearly shows that several extensive patches of clouds have formed over temperate latitudes. The appearance of these clouds reveals the existence of weather. Tracking these features is currently underway by scientists, who hope to gain a better understanding of global circulation, regional weather patterns, and localized meteorology in Titan’s skies. 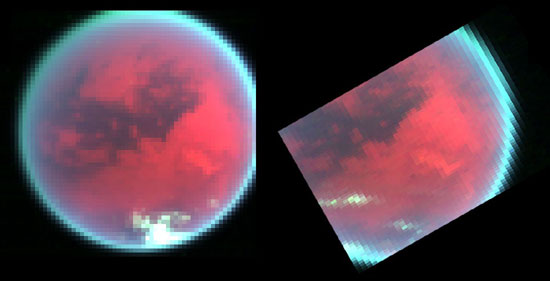 The colors red, green, and blue represent near-infrared images obtained at 2.01 micron, 2.83 micron and 2.13 micron, respectively. These colors explore the surface and atmosphere of Titan with varying effectiveness. The red color images the surface at a wavelength (2.01 micron) where the surface is relatively bright, making the surface appear reddish in these color images. The green color (2.83 micron) images the surface as well, but due to enhanced absorption of sunlight by the surface and lower atmosphere, the surface is relatively dark here compared to the red. The blue color (2.13 micron) is at a wavelength where sunlight cannot reach the surface at all due to strong absorption by the atmospheric gas methane. In contrast to the reddish surface, bright clouds at a relatively high altitude (here, about 30 kilometers (19 miles) above the ground) residing above most of the atmospheric absorption appear whitish in these representations, as they reflect sunlight effectively in all three near-infrared colors.

The Cassini-Huygens mission is a cooperative project of NASA, the European Space Agency and the Italian Space Agency. The Jet Propulsion Laboratory, a division of the California Institute of Technology in Pasadena, manages the Cassini-Huygens mission for NASA’s Science Mission Directorate, Washington, D.C. The Cassini orbiter and its two onboard cameras were designed, developed and assembled at JPL. The visible and infrared mapping spectrometer team is based at the University of Arizona, Tucson.