There is much to examine in detailed close-ups like this one of Saturn’s atmosphere. Scientists are particularly interested in the bright, and in some places turbulent-looking, thin boundary between the large-scale features in the upper half of the image. The characteristic features of this thin boundary might be suggestive of a place where convection is occurring. Convection in Saturn’s atmosphere occurs when sufficiently warm air at deeper levels rises to levels where it becomes less dense than the surrounding air.

Coverage on Saturn extends here from 18 degrees south to 50 degrees south latitude. Contrast in the image was enhanced to aid the visibility of atmospheric features.

The image was taken with the Cassini spacecraft wide-angle camera on Aug. 19, 2005, at a distance of approximately 487,000 kilometers (302,000 miles) from Saturn using a filter sensitive to wavelengths of infrared light centered at 752 nanometers. The image scale is 25 kilometers (16 miles) per pixel. 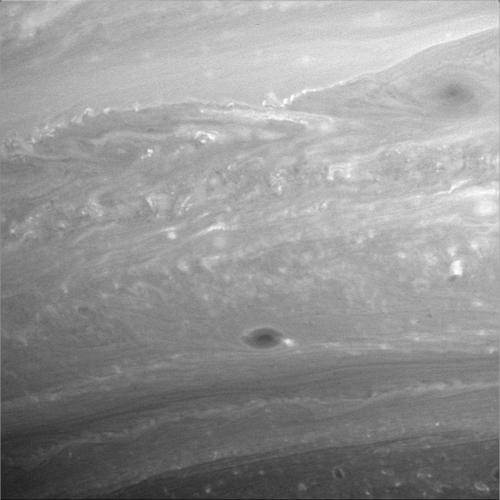 For more information about the Cassini-Huygens mission visit http://saturn.jpl.nasa.gov . The Cassini imaging team homepage is at http://ciclops.org.