Bright, wispy markings stretch across a region of darker terrain on Saturn’s moon Rhea. In this extreme false-color view, the roughly north-south fractures occur within strips of material (which appear greenish here) that are a different color from the surrounding cratered landscape.

To create the false-color view, ultraviolet, green and infrared images were combined into a single black and white picture that isolates and maps regional color differences. Most of the large-scale variations in brightness across the surface are removed by this process. This “color map” was then superimposed over a clear-filter image.

The origin of the color differences is not yet understood, but it may be caused by subtle differences in the surface composition or grain sizes making up the icy soil. 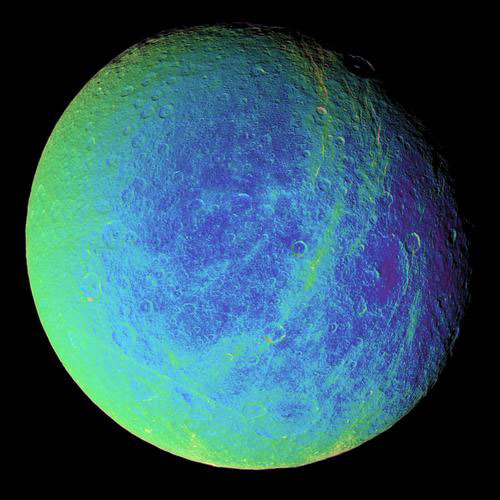 Wispy markings were seen on the trailing hemispheres of both Rhea and Dione in images taken by NASA’s Voyager spacecraft, and were hypothesized by some researchers to be the result of material extruded onto the surface by ice volcanism. Cassini’s earlier revelation of the braided fractures on Dione led to speculation that Rhea’s wisps might also be created by fractures.

This view shows terrain on the trailing hemisphere of Rhea (1,528 kilometers, or 949 miles across). North is up.