This movie, showing six of Saturn’s small ring-region moons as they raced around the planet, was made from images taken by the Cassini spacecraft on Nov. 15, 2004. 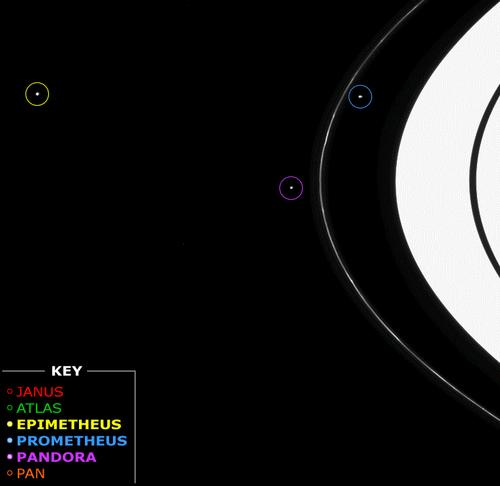 While little detail on the moons is visible, it is possible to discern the irregular shapes of the larger ones seen in this movie. The rings are overexposed due to the long exposure times used (2 seconds per image): doing so makes the smaller, fainter moons (especially Pan) easier to detect. The direction of the moons’ motion is prograde, or clockwise as seen from Cassini’s vantage point beneath the ring plane.

In addition to the moons, knots in the F ring are visible here, as are several faint ringlets on both sides of that ring¿s bright core. Faint knots also appear sporadically within the narrow Encke gap, where tiny Pan resides.

The movie consists of 73 images and spans a period of just over 14.5 hours, about an orbital period of the particles in the F ring.

The individual frames were taken at 12 minute intervals in visible light with Cassini¿s narrow angle camera. The spacecraft was about 4.5 million kilometers (2.8 million miles) from Saturn when the images were taken. Image scale is approximately 26.5 kilometers (16.5 miles) per pixel.