A collection of new ring phenomena, first observed in the sequence of images taken of the dark side of Saturn’s rings immediately after Cassini entered orbit, may be evidence of the clumping and aggregation of ring particles. This phenomena is caused by the combined gravitational effects of Saturn, orbiting moons, and other ring particles.

Image A displays an unusual mottled-looking narrow region, with a radial width varying with longitude from 5 to 10 kilometers (3 to 6 miles), seen for the first time about 60 kilometers (37 miles) inside the outer edge of Saturn’s A ring. The resolution of this dayside image is about 1 kilometer (0.6 miles) per pixel. Image B is a close-up of the region, mapped into a longitude-radius system and contrast enhanced. The region is characterized by blotchy light and dark areas about 30 to 40 kilometers (19 to 25 miles) in longitudinal extent. The observed longitudinal extent of this region is about 3.5 degrees.

The mottled regions also are probably caused by particle clumping brought about by gravitational disturbances. The outer A ring edge is sculpted into a seven-lobed pattern called a Lindblad resonance (a type of dynamical resonance that occurs in rings systems) with the co-orbital satellites Janus and Epimetheus. The resonant perturbations in this region are complicated by the presence of these two moons whose orbits are within 50 kilometers (31 miles) of each other. 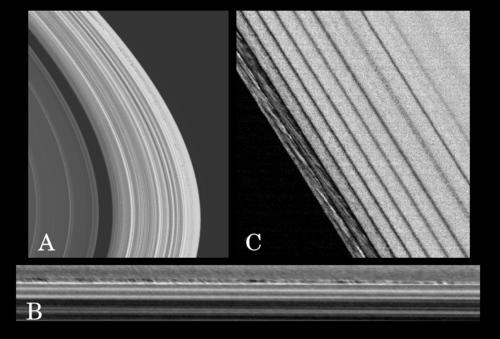 Image C is a dark-side image of the outer edge of the Encke gap, with a resolution of about 270 meters (886 feet) pixel, taken 18 degrees upstream from the moon Pan, which inhabits the gap. The regularly spaced, narrow dark lanes observed here are the wakes caused by Pan. Rope-like features can be seen between the first two wakes nearest the gap edge. These features are unique in all Cassini images taken so far. They generally are between 10 and 20 kilometers (6 and 12 miles) long.

In their orbits around Saturn, the particles comprising the rings in this region pass through the Pan wakes. When they do so, they are forced closer together than usual. These ropy features appear to be a product of the enhanced gravitational disturbances that occur when the particles pass through the wakes caused by Pan and consequently are squeezed close together. These disturbances obviously persist even outside the wakes, as is evident here in the presence of the ropy structures in the bands in between the wakes.