Two of Saturn’s moons make appearances in this view in very different ways. Janus (181 kilometers, or 113 miles across) glides past at bottom, near the edge-on ringplane. Above are the arcing shadows cast onto the northern hemisphere by the rings, along with the shadow of Mimas (397 kilometers, or 247 miles across) against a backdrop of wispy clouds. Mimas’ shadow appears elliptical due to its projection onto the spheroidal shape of Saturn’s visible atmosphere.

The image was taken with the Cassini spacecraft wide-angle camera on Aug. 5, 2007 using a spectral filter sensitive to wavelengths of infrared light centered at 750 nanometers. The view was acquired at a distance of approximately 4 million kilometers (2.5 million miles) from Saturn. Image scale is 47 kilometers (29 miles) per pixel. 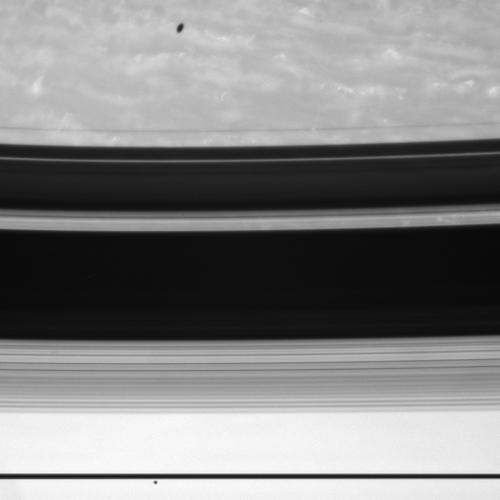