Mimas drifts along in its orbit against the azure backdrop of Saturn’s northern latitudes in this true color view. The long, dark lines on the atmosphere are shadows cast by the planet’s rings.

Saturn’s northern hemisphere is presently relatively cloud-free, and rays of sunlight take a long path through the atmosphere. This results in sunlight being scattered at shorter (bluer) wavelengths, thus giving the northernmost latitudes their bluish appearance at visible wavelengths.

At the bottom, craters on icy Mimas (398 kilometers, or 247 miles across) give the moon a dimpled appearance. 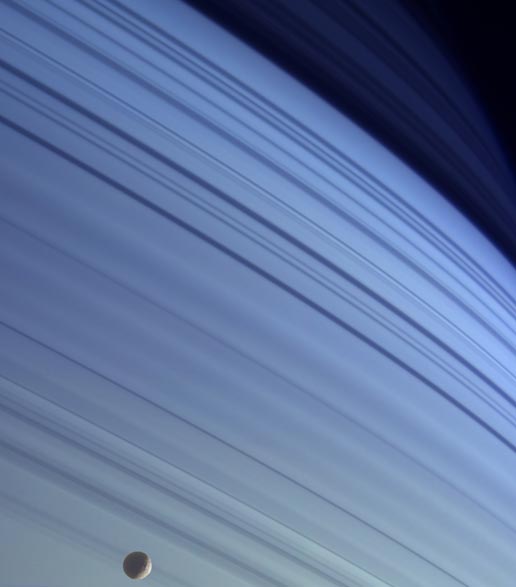 Images taken using infrared (930 nanometers), green (568 nanometers) and ultraviolet (338 nanometers) spectral filters were combined. The colors have been adjusted to match closely what the scene would look like in natural color. See http://www.nasa.gov/mission_pages/cassini/multimedia/pia06142.html for a similar view in natural color.