A small and battered reminder of the solar system’s violent youth, the ice moon Mimas hurtles around its gas giant parent, Saturn. At 397 kilometers (247 miles) across, Mimas is simply dwarfed by the immensity of Saturn. The planet is more than 300 times as wide as the moon.

Mimas is seen here against the night side of Saturn. The planet is faintly lit by sunlight reflecting off its rings. 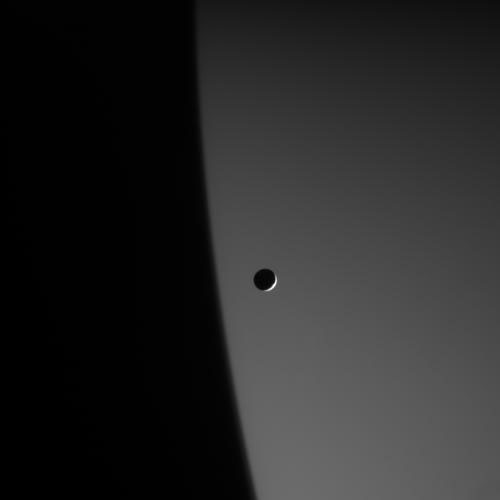 The image was taken in visible light with the Cassini spacecraft narrow-angle camera on Jan. 20, 2006, at a distance of approximately 1.4 million kilometers (900,000 miles) from Mimas and at a Sun-Mimas-spacecraft, or phase, angle of 145 degrees. Image scale is 9 kilometers (5 miles) per pixel.