The Cassini spacecraft provides a stunning view of the Odysseus impact basin on Tethys. The enormous basin is 450 kilometers (280 miles) wide. The medium-sized crater Melanthius is seen along the terminator at lower left.

This view looks toward the leading hemisphere of Tethys (1,071 kilometers, or 665 miles across). North is up.

The image was taken in visible light with the Cassini spacecraft narrow-angle camera on July 21, 2007. The view was obtained at a distance of approximately 211,000 kilometers (131,000 miles) from Tethys and at a Sun-Tethys-spacecraft, or phase, angle of 46 degrees. Image scale is 1 kilometer (0.6 mile) per pixel. 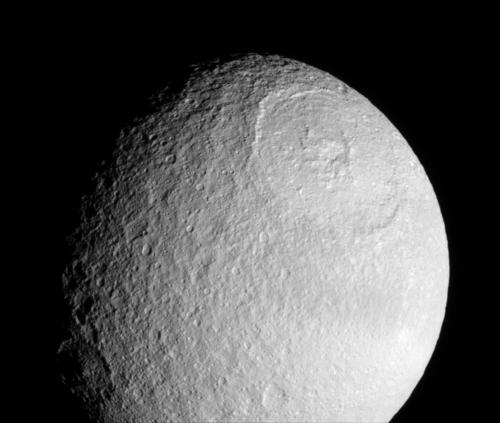 Science and Exploration
Nectaris Fossae And Protva Valles On Mars

Earth
Kolkata, India As Seen From Space By Copernicus Sentinel-2

Kolkata, India As Seen From Space By Copernicus Sentinel-2