Dione looms large before the rings of Saturn. Atlas (32 kilometers, or 20 miles across) can be spotted to the lower left of the larger moon, peeking out from behind the rings.

This view looks toward the leading hemisphere of Dione (1,126 kilometers, or 700 miles across). North is up and rotated 25 degrees to the right. The view is toward the sunlit side of the rings from less than a degree below the ringplane. The image was taken in visible green light with the Cassini spacecraft narrow-angle camera on July 22, 2007. The view was obtained at a distance of approximately 695,000 kilometers (432,000 miles) from Dione. Image scale is 4 kilometers (3 miles) per pixel. 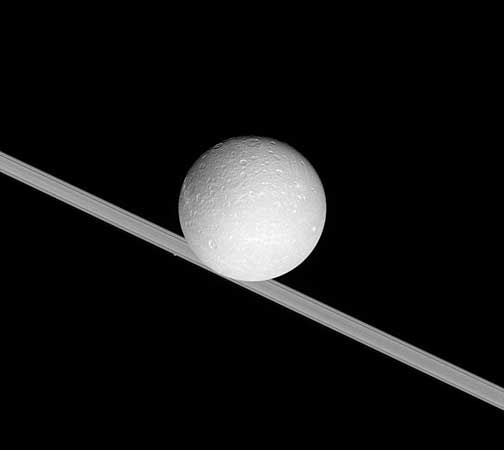