NASA Cassini Image: Iapetus: A View from the Top

This oblique view of Saturn’s moon Iapetus from high latitude shows how the dark, heavily cratered terrain of Cassini Regio transitions to a bright, icy terrain at high latitudes. 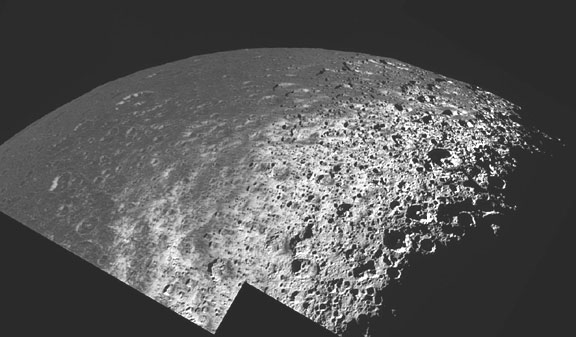 In this mosaic of two high resolution images taken during Cassini’s New Year’s Eve 2004 flyby of Iapetus, the direction toward the north pole is approximately 15 degrees below the horizontal on the right. At the equator terrains are uniformly covered with a dark mantle of material that has a reflectivity of about 4 percent. At latitudes toward the pole of about 40 degrees, the dark deposits become patchy and diffuse as the surface transitions to a much brighter, icy terrain near the pole. The brightest icy materials exhibit visual reflectivity over 60 percent.

Superimposed on the bright terrain is a subtle, ghostly pattern of crudely parallel, north-south trending wispy streaks. The streaks, which were discovered during this flyby of Iapetus, are typically a few kilometers wide and sometimes tens of kilometers long. Their appearance and orientation may be connected with the emplacement of dark materials that cover Cassini Regio. The dark materials might represent the gradual accumulation of dark debris falling from space, or alternatively, may represent fallout from plume-style eruptions that may have accompanied the formation of Iapetus’s enigmatic equatorial ridge (see PIA06166).

Also seen in this mosaic are conspicuous, north-facing bright crater walls. An example can be seen in the upper left where the bright, 4-kilometer-high (2.5 miles) walls of a 70 kilometer (44 mile) central-peak crater lies.

The bright crater walls are often higher in brightness than the corresponding south-facing walls of the same crater. They are vaguely reminiscent of bright north-facing crater walls that were discovered by NASA’s Voyager and Galileo spacecraft in craters near the poles of the Jovian satellites Callisto and Ganymede. In the case of the Jovian satellites, cold-trapping of frosts on north-facing slopes and sublimation of ices from south-facing slopes are thought to produce the north-south asymmetries in crater wall brightness. However, the occurrence of some young-appearing craters on Iapetus that have bright north-facing and dark south-facing slopes, and the pattern of streaks near the north pole of Iapetus suggests that another mechanism may be responsible for the crater wall brightness asymmetries on Iapetus.

One possibility is that the south-facing slopes may be stained by the same process that emplaced the low brightness coating throughout the region. In this case, the north-pointing scarps might be bright because they face away and are shielded from the putative falling spray of dark materials. Bright south-facing slopes would exist primarily on young craters that have not been exposed to the darkening agent long enough to be stained.

The image was obtained in visible light with the Cassini spacecraft narrow angle camera on Dec. 31, 2004, at a distance of about 123,370 kilometers (76,658 miles) from Iapetus and at a Sun-Iapetus-spacecraft, or phase, angle of 93 degrees. Resolution achieved in the original image was 732 meters (2,401 feet) per pixel.