This stunning false-color view of Saturn’s moon Hyperion reveals crisp details across the strange, tumbling moon’s surface. Differences in color could represent differences in the composition of surface materials. The view was obtained during Cassini’s close flyby on Sept. 26, 2005.

Hyperion has a notably reddish tint when viewed in natural color. The red color was toned down in this false-color view, and the other hues were enhanced, in order to make more subtle color variations across Hyperion’s surface more apparent. 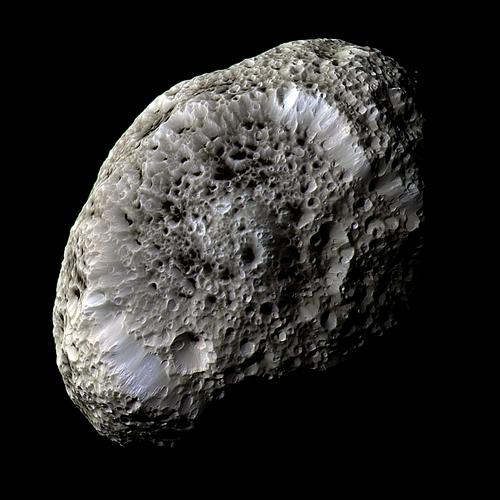 Images taken using infrared, green and ultraviolet spectral filters were combined to create this view. The images were taken with the Cassini spacecraft’s narrow-angle camera at a distance of approximately 62,000 kilometers (38,500 miles) from Hyperion and at a Sun-Hyperion-spacecraft, or phase, angle of 52 degrees. The image scale is 362 meters (1,200 feet) per pixel.