This view is among the closest Cassini images of Tethys’ icy surface taken during the Sept. 24, 2005 flyby.

This false-color image, created with infrared, green and ultraviolet frames, reveals a wide variety of surface colors across this terrain. The presence of this variety at such small scales may indicate a mixture of different surface materials. Tethys was previously known to have color differences on its surface, especially on its trailing side, but this kind of color diversity is new to imaging scientists. For a clear-filter view of this terrain, see PIA07736. 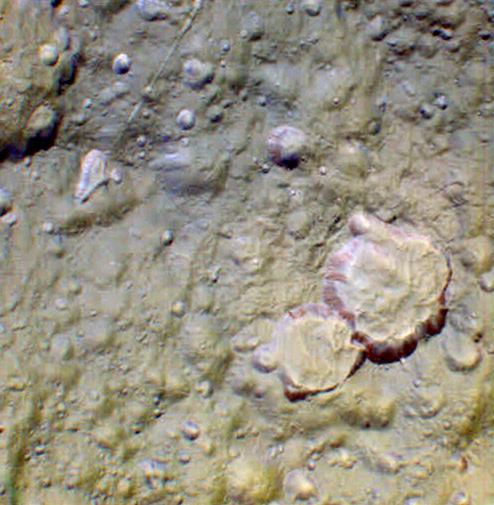 This view is centered on terrain at approximately 4.2 degrees south latitude and 357 degrees west longitude on Tethys. The view has been rotated so that north on Tethys is up.

The images for this view were obtained using the Cassini spacecraft narrow-angle camera at distances ranging from approximately 18,400 to 19,000 kilometers (11,400 to 11,800 miles) from Tethys and at a Sun-Tethys-spacecraft, or phase, angle of 17 degrees. Image scale is 213 meters (700 feet) per pixel.