The Cassini spacecraft reveals details on the surface of small, irregularly shaped Helene in this close-up view, obtained during the spacecraft’s closest encounter with this moon during its four-year primary mission.

The image was taken in visible green light with the Cassini spacecraft narrow-angle camera on July 20, 2007. The view was acquired at a distance of approximately 39,000 kilometers (24,000 miles) from Helene and at a Sun-Helene-spacecraft, or phase, angle of 61 degrees. Image scale is 231 meters (758 feet) per pixel. 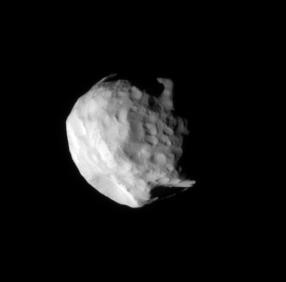