This view has been rotated so that north on Titan is up. There is a slight difference in brightness from north to south, a seasonal effect that was noted in NASA’s Voyager spacecraft images, and is clearly visible in some infrared images from Cassini (see http://photojournal.jpl.nasa.gov/catalog/PIA06121). The northern polar region is largely in darkness at this time.

This image was taken with the Cassini spacecraft wide angle camera through using red, green and blue spectral filters were combined to create this natural color view. The image was acquired at a distance of approximately 229,000 kilometers (142,000 miles) from Titan and at a Sun-Titan-spacecraft, or phase, angle of 20 degrees. Resolution in the image is about 14 kilometers (9 miles) per pixel. 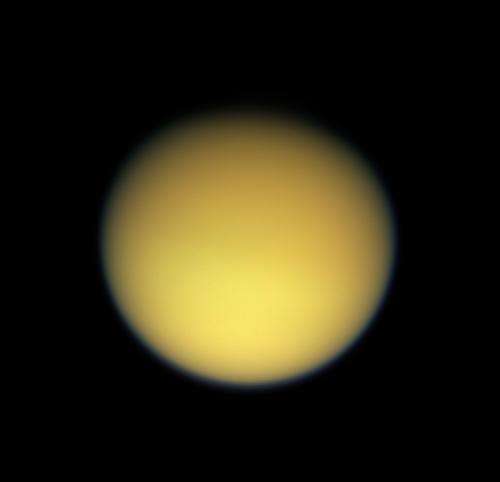