NASA Cassini Image: Hazy All Over

Following its first flyby of Titan, Cassini gazed back at the smog-enshrouded moon’s receding crescent. This natural color view was seen by the spacecraft about one day after closest approach. The slight bluish glow of Titan’s haze is visible along the limb.

The superimposed coordinate system grid in the accompanying image at right illustrates the geographical regions of the moon that are illuminated and visible, as well as the orientation of Titan — lines of longitude converge on the South Pole near the moon’s eastern limb. The yellow curve marks the position of the boundary between day and night on Titan.

Images taken through blue, green and red filters were combined to create this natural color view. The images were obtained with the Cassini spacecraft wide angle camera on July 3, 2004, from a distance of about 790,000 kilometers (491,000 miles) from Titan and at a Sun-Titan-spacecraft, or phase angle of 115 degrees. The image scale is 47 kilometers (29 miles) per pixel. 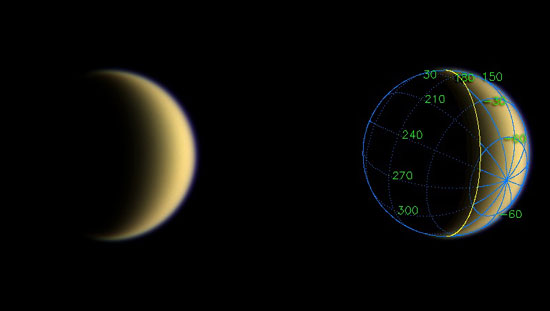