A spectacular landslide within the low-brightness region of Iapetus’s surface known as Cassini Regio is visible in this image from Cassini. Iapetus is one of the moons of Saturn.

The landslide material appears to have collapsed from a scarp 15 kilometers high (9 miles) that forms the rim of an ancient 600 kilometer (375 mile) impact basin. Unconsolidated rubble from the landslide extends halfway across a conspicuous, 120-kilometer diameter (75-mile) flat-floored impact crater that lies just inside the basin scarp. 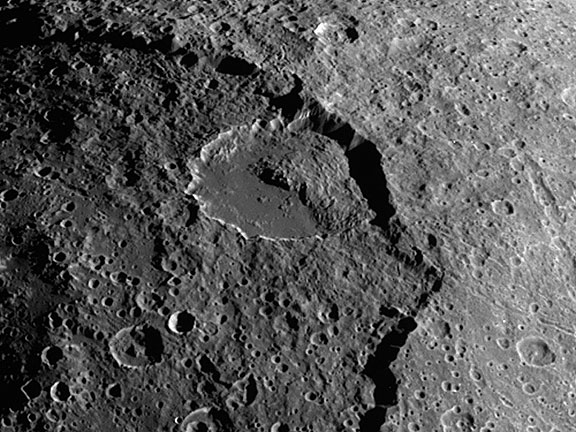 Landslides are common geological phenomena on many planetary bodies, including Earth and Mars. The appearance of this landslide on an icy satellite with low-brightness cratered terrain is reminiscent of landslide features that were observed during NASA’s Galileo mission on the Jovian satellite Callisto. The fact that the Iapetus landslide traveled many kilometers from the basin scarp could indicate that the surface material is very fine-grained, and perhaps was fluffed by mechanical forces that allowed the landslide debris to flow extended distances.

In this view, north is to the left of the picture and solar illumination is from the bottom of the frame. The image was obtained in visible light with the Cassini spacecraft narrow angle camera on Dec. 31, 2004, at a distance of about 123,400 kilometers (76,677 miles) from Iapetus and at a Sun-Iapetus-spacecraft, or phase, angle of 78 degrees. Resolution achieved in the original image was 740 meters (2,428 feet) per pixel. The image has been contrast-enhanced and magnified by a factor of two to aid visibility.