This contrast-enhanced view of Saturn’s faint G ring shows its extremely sharp inner edge and more diffuse outer boundary. Using its large high-gain antenna as a shield, the Cassini spacecraft flew through the region interior to the G ring during insertion into Saturn orbit. The spacecraft was struck many times by the fine icy particles that populate the region between the F and G rings.

The image was taken in visible light with the Cassini spacecraft narrow-angle camera on Jan. 19, 2006, at a distance of approximately 1.2 million kilometers (700,000 miles) from Saturn. The image scale is 7 kilometers (4 miles) per pixel. 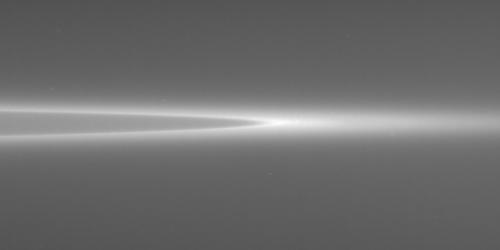