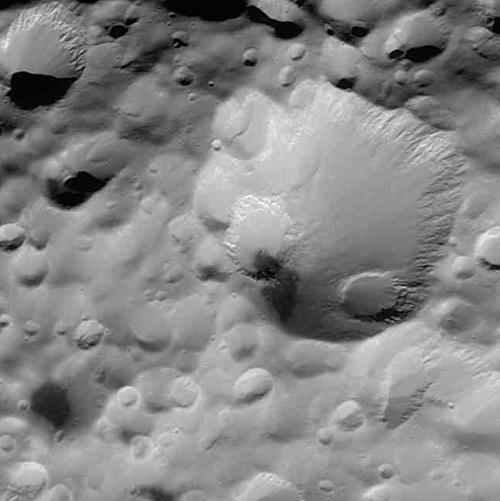 The sequence begins with Cassini at a distance of 244,000 kilometers (152,000 miles) from Hyperion, with the irregularly-shaped moon not yet filling the frame. From this distance, Cassini can see that strange, dark-floored craters dot this little world.

As Cassini continues toward Hyperion, it becomes apparent that the steep sides of the giant impact feature at the center have a “fluted” appearance. The walls of this feature appear to have experienced landslides that have partly covered the craters lining it.

With Cassini at an altitude of 18,000 kilometers (11,000 miles) above Hyperion, the movie then zooms in on the large crater called Meri, which itself contains several smaller craters. The rim of Meri possesses icy outcrops, while its floor is filled with landslide debris and some of the strange, dark material. The image scale at this point is about 215 meters (700 feet) per pixel.

Cassini pans across a landscape shaped by eons of impacts, revealing the dark-floored craters at high resolution. The trip to Hyperion ends as the movie pans away from the battered moon’s darkened limb.