The ultraviolet image on the left indicates water ice abundance across the surface: the bright north polar terrain (shown in red) is the iciest region in this view. Away from the pole, as the color shifts to blue, less water ice is present in the surface. The darkest terrain, which includes very little water ice, is shown in light blue. The dark sky background viewed during the observation is shown as purple in this color scheme.

The ultraviolet-light image was taken during a flyby in December 2004. A visible light image taken on the same date is shown on the right for reference (see Encountering Iapetus). 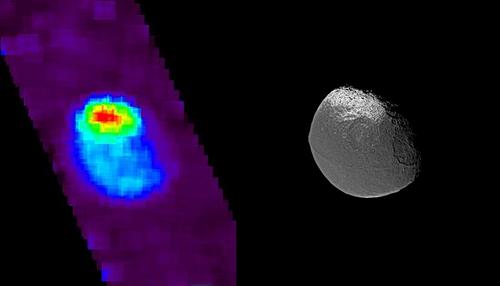 The Cassini-Huygens mission is a cooperative project of NASA, the European Space Agency and the Italian Space Agency. The Jet Propulsion Laboratory, a division of the California Institute of Technology in Pasadena, manages the mission for NASA’s Science Mission Directorate, Washington, D.C. The Cassini orbiter was designed, developed and assembled at JPL. The ultraviolet imaging spectrograph was designed and built at, and the team is based at the University of Colorado, Boulder. The imaging operations center is based at the Space Science Institute in Boulder, Colo.