This artist concept shows the detection of a dynamic atmosphere on Saturn’s icy moon Enceladus. The Cassini magnetometer instrument is designed to measure the magnitude and direction of the magnetic fields of Saturn and its moons. During Cassini’s three close flybys of Enceladus– Feb. 17, March 9 and July 14, 2005–the instrument detected a bending of the magnetic field around Enceladus due to electric currents generated by the interaction of atmospheric particles and the magnetosphere of Saturn. 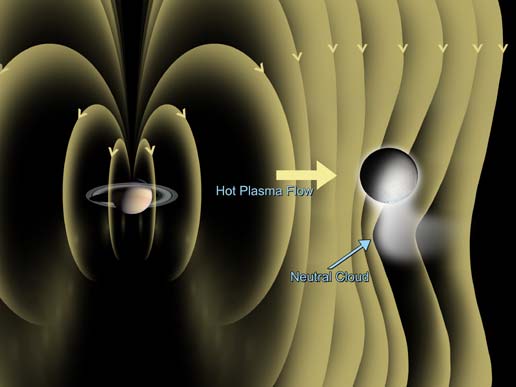 The graphic shows the magnetic field observed by Cassini, as well as the predicted neutral cloud being vented from the south pole. Cassini’s magnetometer observed bending of the magnetic field consistent with its draping around a conducting object. That indicates that the Saturnian plasma is being diverted away from an extended atmosphere.

The Cassini-Huygens mission is a cooperative project of NASA, the European Space Agency and the Italian Space Agency. The Jet Propulsion Laboratory, a division of the California Institute of Technology in Pasadena, manages the mission for NASA’s Science Mission Directorate, Washington, D.C. The Cassini orbiter was designed, developed and assembled at JPL. The magnetometer team is based at Imperial College in London, working with team members from the United States and several European countries.

For more information about the Cassini-Huygens mission visit http://saturn.jpl.nasa.gov . The magnetometer team homepage is http://www.imperial.ac.uk/research/spat/research/cassini/ .