This Cassini view of Enceladus hints at the curvilinear, groove-like features that crisscross the moon’s surface, as seen in images from NASA’s Voyager spacecraft.

The image shows the trailing hemisphere of Enceladus, which is the side opposite the moon’s direction of motion in its orbit. Enceladus is 499 kilometers (310 miles) across.

The image was taken in visible light with the Cassini spacecraft narrow angle camera on Oct. 27, 2004, at a distance of about 766,000 kilometers (476,000 miles) from Enceladus and at a Sun-Enceladus-spacecraft, or phase, angle of 34 degrees. The image scale is 4.6 kilometers (2.8 miles) per pixel. 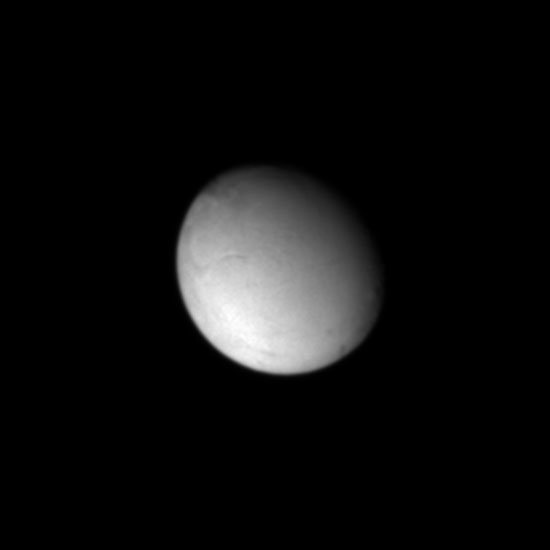 The Cassini-Huygens mission is a cooperative project of NASA, the European Space Agency and the Italian Space Agency. The Jet Propulsion Laboratory, a division of the California Institute of Technology in Pasadena, manages the Cassini-Huygens mission for NASA’s Office of Space Science, Washington, D.C. The Cassini orbiter and its two onboard cameras, were designed, developed and assembled at JPL. The imaging team is based at the Space Science Institute, Boulder, Colo.